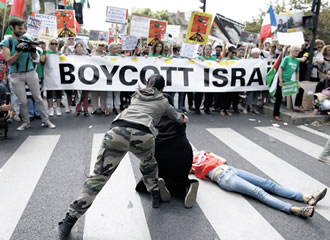 ON SATURDAY 2 August, the residents of this war-ravaged town in northern Gaza began to trickle back to their homes, clutching their possessions and a sense of hope.

They had been given the best news since the war began almost three and half weeks ago. Israel's military had informed them that its operations in Beit Lahiya had ceased and that they could return. Not everyone did, of course, because mutual trust was understandably a rare commodity after generations of war between the Israelis and the Palestinians.

For many residents, what it really came down to was a choice: Do I want to continue to live in an overcrowded United Nations school, sleeping on blankets inside classrooms, with barely enough water to bathe? Or do I want to return home, sleep in my own bed and take a shower in my own bathroom, but risk facing another airstrike or artillery shells?

With the Israeli assurance, it was a no-brainer for the Attar clan.

"We were told by the Israelis to go back to our homes, that it would be safe," said Abu Khalid al-Attar, a family elder. "And we believed them."

On that Saturday afternoon, the large extended family of farmers left the school where they had been seeking refuge, and which was run by the United Nations Relief and Works Agency, for two weeks.