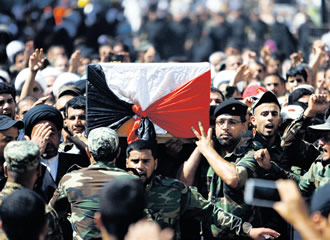 THE ANCIENT northern Iraqi town of Sinjar emptied Sunday 3 August, with thousands of people fleeing on foot as Sunni extremist militants made their first significant punches through the defences of overstretched Kurdish forces.

Sinjar is an ancestral home of the long-persecuted Yazidi religious sect, which the Islamic State has branded as devil worshipers, and few of its residents stayed to find out what was planned for them when the group's militants entered on Sunday.

Until then, Sinjar had been protected by Kurdish fighters known as pesh merga, but officials from the semi-autonomous northern region have been warning for weeks that they are poorly equipped to sustain the defence of the nearly 1,040-kilometre border they now share with the militants.

The town of Wana also fell on Sunday, putting the Islamic State within striking distance of Mosul's hydroelectric dam, the largest in the country. After nearly two months of skirmishes, it was a second day of losses for the Kurds with extremists seizing the nearby town of Zumar on Saturday 2 August and two small oil fields.

The al-Qaida splinter group marked its entry into Sinjar by blowing up a Shiite shrine and demanding that residents convert or die. Islamic State-affiliated social media accounts circulated pictures of its gains — one claimed to show abandoned military vehicles, another gun-toting militant sitting at the governor's desk.

The pesh merga are known for their fighting prowess, but rocky relations with Baghdad mean they have no munitions supplies from the central government and their soldiers have not received salaries for months. Meanwhile, their lack of sovereignty complicates arms purchases from abroad and Baghdad put a temporary hold on cargo flights to the north last month.