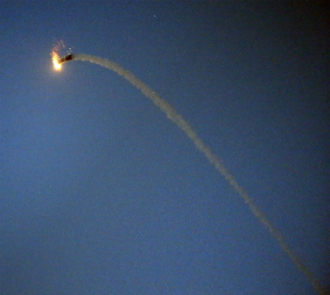 Israeli aircraft are targeting houses in the Gaza Strip as never before, firing precision missiles into family living rooms. They have killed at least five known militants with the tactic — but they appear to have killed more civilians, including a growing number of women and children.

Israeli defense officials say their mission is not only to stop Hamas and other militant groups in the Gaza Strip from firing ever more powerful rockets deeper into Israel, as they did on Wednesday, but to weaken Hamas by killing its commanders.

But by targeting 60 houses in the past 48 hours, Israel's risk of inflicting collateral damage has soared. The health ministry in Gaza reported Wednesday evening that 41 residents of the coastal enclave have been killed in Israeli strikes since the conflict began early Tuesday — and that 13 of the dead were 16 years old or younger. At least seven were women, and a handful were elderly, such as Naifeh Farjallah, who was 80.

With the conflict intensifying and no sign of a cease-fire in sight, Palestinian militants fired rockets that flew well beyond Tel Aviv, Israel's commercial capital, and landed in the country's coastal high-tech corridor.

The major Mediterranean port city of Haifa, about 160 kilometres north of the Gaza border, ordered the opening of its public bomb shelters Wednesday after rockets hit towns to the south at Zichron Yaakov, Caesaria and Hadera. It was the first time that rockets from Gaza had flown that far into Israel.

The Israeli military said a Hamas rocket that struck Hadera, about 70 miles north of the Gaza border, was an M-302 class rocket, similar to ones found aboard a freighter that the Israelis intercepted in the Red Sea in March. The ship was ferrying a load of Iranian-supplied arms to Gaza when it was stopped, the Israelis said.

The group Human Rights Watch on Wednesday declared that since the Palestinian rocket attacks on Israel are both indiscriminate and target civilian population centers, they amount to war crimes. The group also said: "Israeli attacks targeting homes may amount to prohibited collective punishment."

Israeli F-16s, Apaches and armed drones have hit more than 500 targets in the Gaza Strip over the past two days.

Awad Al Nawasra was sleeping under a dusty orange tree during the long hot afternoon Wednesday when he said: "I heard the voice of the rocket and then I was floating."

When he awoke, the front of his two-story house was torn away by an Israeli airstrike. His 24-year-old son was dead alongside his wife. Buried in the rubble were his two grandsons, ages 4 and 2.

Nawasra said he had nothing to do with Hamas or militants. He said his dead son was a telephone technician.

Palestinian Authority President Mahmoud Abbas condemned the airstrikes on Gaza and compared the Israeli operation to a form of "genocide."

"This war is not against Hamas or any faction, but against the Palestinian people," Abbas said.

The Israelis say that Hamas does not maintain traditional forces or military bases but hides its weapons caches and launch pads among the populace, while its commanders live at home with their families. The Israelis have killed at least five known militants from the groups Hamas and Islamic Jihad.

"We use everything at hand to try to avoid and avert civilian casualties," said Israeli military spokesman Lt. Col. Peter Lerner. "We phone up our enemies and tell them that we are going to blow up the building, we throw non-explosive munitions and that is a sign they are supposed to vacate the building. Only once we have seen them vacate the building — and we are talking about command and control places and not the terrorists themselves — then we hit."

At least 300 people, more than half of them women and children, were injured seriously enough to be taken to area hospitals in the past two days, said Gaza Health Ministry spokesman Ashraf al-Qidra.

On Wednesday morning, two Israeli missiles struck the side yard of Zaher Hamdan, who was found an hour later slumped against a neighbour's wall in the northern Gaza town of Beit Hanoun, sobbing and cursing the Israelis.

"The Israelis feed off blood," he said. "If they want to knock down my house, knock it down! But they kill. They love killing."

Hamdan said he had nothing to do with Hamas or other militant groups. He said there were no phone calls or warning rockets.

Hamdan's sister-in-law, Sahar al-Masri, 40, and her 14-year-old son, Ibrahim, were sitting beneath a shade tree in the garden when two rockets struck. The second one killed them both.

Two of Masri's daughters were wounded. One of the daughters, a toddler, was vomiting and crying in the back of an ambulance at nearby Beit Hanoun Hospital, her right leg and chest pocked by shrapnel wounds.

A surgeon at the hospital, Ayman Hamdan, said the young girl's mother and brother died of massive bleeding. "They were dead when they arrived," the physician said. "The rockets are designed to kill. They are very powerful, very lethal."

The surgeon said his small hospital has treated nine patients who were seriously injured by Israeli airstrikes in the past two days. Eight other patients either died in surgery or arrived dead in the ambulance.

"We are not seeing wounded or dead fighters," he said. "Most of these people look to me like civilians."

Many Israelis want their military to do what it takes to stop the rocket fire from Gaza.

Miri Eisin, a military analyst and former deputy head of the Israel's combat intelligence corps, said that while it is sad that civilians are sometimes killed, Israel has the right to hit its enemy Hamas where he lives, which is in dense urban areas.

"We have the right to protect our citizens," Eisin said. "We do not put them in the line of fire."

Yaniv Mizrachi runs a shwarma restaurant near city hall in the southern Israeli city of Ashkelon, where air raid sirens have been sounding hourly. He defended the current military operation as the only way to restore a "normal life" to his city.

"This has been going on for years," he said. "This time I hope the army sorts it out once and for all."