Timbuktu, the centuries-old Malian center of Islamic learning on the southern edge of the Sahara desert, is rebuilding after Islamist militants razed some of its most revered shrines built in the 14th and 15th centuries.

Reconstruction is taking place brick by brick, as workers use banco, a mixture of mud and straw, to restore 14 of the 16 mausoleums destroyed or damaged by al-Qaida in the Islamic Maghreb and Ansar Dine, or "defenders of the faith." Those two groups follow Islam's Salafi movement which regards the practices of the Sufis in Timbuktu as sacrilegious. 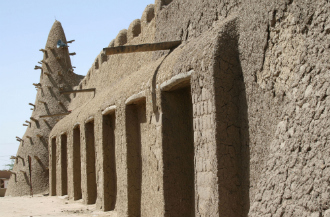 "We have witnessed the destruction, we are now seeing the start of the reconstruction," the imam of the Djingareyber mosque, Abderrahmane Ben Essayouti, said as he ambled in a flowing, wide-sleeved robe known as a boubou to attend Friday prayers this month. "To us, it is a new birth for Timbuktu."

The militants were driven out of what's known as the City of the 333 Saints in January last year after a 10-month occupation. The city, 706 kilometers (438 miles) north of the capital, Bamako, is protected by France's Serval intervention force, United Nations peace-keepers and Malian troops and police. The last attack on the Timbuktu occurred on 28 September when a suicide bomber struck the Malian military barracks.

"By rebuilding these monuments, we will destroy the work of the jihadists," Andrzej Bielecki, the European Union's political counselor, said at a 14 March conference at Timbuktu's Ahmed Baba Institute of Higher Learning and Islamic Research.

So far, 3 million dollars of the 11 million dollars needed for the four-year rebuilding project has been raised, according to Lazare Eloundou, representative to Mali of the UN Educational, Scientific and Cultural Organization, or Unesco. The main sponsors so far are France, the EU, Norway and Switzerland, he said. Timbuktu is a Unesco World Heritage site.

As local bricklayers laid the foundation stone of the Djingareyber mosque, Malian Minister of Culture Bruno Maiga pledged to restore the cultural icons of the city.

While Timbuktu is generally peaceful today, there have been some attacks by militants in the surrounding countryside, residents.say.

"The city is quite calm nowadays, even though residual criminal acts remain," said Aboubacrime Cisse, president of the council of Timbuktu localities. "On terrorist issues we bet on Serval. People rely on Serval for this kind of issue, much more than on the UN soldiers."

French forces intervened in Mali in January last year to prevent Islamist fighters allied with ethnic Tuareg separatists from taking control of the northern part of the country.

France, which has 50 soldiers in Timbuktu, is reducing the number of its troops in the West African nation to 1,000 from 1,600 now, with President Francois Hollande saying on 8 January the intervention's objectives "have been largely achieved." Yet security in the north of Africa's third-biggest gold producer, especially towns such as Gao, 1,200 kilometers from the Bamako, is precarious.

Besides the French troops stationed in Timbuktu, Mali has about 160 soldiers along with 600 UN peace-keepers, Remi Libessart, spokesman for France's Operation Serval, said by phone from the capital.

The large signs that the militants had planted to promote Shariah, or Islamic law, along the city's streets have been painted white. A rusting plaque lying in the sand along the airport road is one that used to say, "Timbuktu: the gateway to the application of Shariah law, welcome."

Evidence of the damage the militants caused with pickaxes remains. Behind the entrance gates at the Cemetery of the Three Saints there are broken earthenware jars and rubble in the sand. Tombs at Djingareyber Mosque were also destroyed by Ansar Dine, which regards the Sufi veneration of saints as blasphemy.

Unesco says that 320,000 ancient manuscripts were smuggled from Timbuktu to Bamako during the Islamists' occupation. More than 4,200 others were destroyed in the Ahmed Baba center courtyard.

While Unesco has said it would like to return the manuscripts to Timbuktu by June, Malian officials are wary.

"The top priority is to digitalise the documents," Professor Abdoulkadri Idrissa Maiga, head of the Ahmed Baba Institute, said in a phone interview. "We cannot risk more damage by returning the manuscripts too quickly to the libraries of Timbuktu. We should not be in a rush."

Refugees from neighboring Mauritania and Burkina Faso are returning to judge if security has improved, according to Cisse, the president of the Timbuktu council.

In the meantime, rebuilding work goes on.

"It is a great honor for us to have this task. The mausoleums have been built by our ancestors, and we will rebuild them following the traditional way," said Alassane Hasseye, the head of a bricklaying team. "I cannot find the words to explain what it does to my heart."