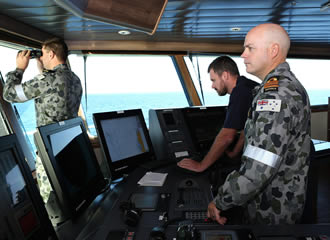 An Australian navy vessel searching for a missing Malaysian passenger jet has picked up deep-sea acoustic signals "consistent" with those emitted by an airplane's black box, the leader of the multinational search operation said Monday.

"Clearly this is a most promising lead, and in the search so far it's probably the best information we've had," retired Air Chief Marshal Angus Houston said at a news conference in Perth.

Houston said the vessel, the Ocean Shield, picked up the signals on two separate occasions Sunday — once for more than two hours, a second time for 13 minutes. On the second occasion, two distinct noises were detected, which would be expected if both the flight data recorder and the cockpit voice recorder are emitting beacons.

Still, Australian officials cautioned that there is no immediate way to confirm that the signals are coming from what's left of Malaysia Airlines Flight MH370, thought to be at the bottom of the Indian Ocean. Confusing matters, a Chinese patrol ship on Friday and Saturday detected signals, about 300 nautical miles from where the Australian vessel is positioned. Officials say it's unlikely that the signals detected by the two vessels came from the same source.

For at least the next day, the Ocean Shield will continue is slow runs over the small area where it has picked up the acoustics. The goal, Houston said, will be to pinpoint the most likely location of the sound. If that can be done, search crews will lower an autonomous vehicle into the water and onto the three-mile-deep ocean floor to search for wreckage and map out a possible debris field.

"This is not the end of the search," Houston said. "We've still got a lot of difficult, painstaking work to do to confirm this is the spot where the aircraft entered the water. The best evidence we could get is imagery from the autonomous vehicle suggesting the aircraft is on the bottom of the ocean."