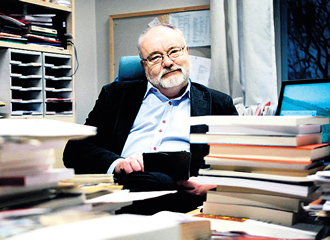 This spring, on 31 May at 16:00, Leif Åberg, Professor of Communications at the University of Helsinki, will end his 41-year-long academic working career. Officially, at least. This is when Åberg retires at the age of 66.

“The university provides a good framework for the kind of work I enjoy. One may develop and brainstorm things, increasingly with younger researchers,” Åberg ponders.

“It is very rewarding to be able to work with young and intelligent people and witness their development. Many disappointments from previous years have quickly been forgotten, once it has been possible to attempt something new.”

The feeling of responsibility has also kept him working. He has almost a dozen doctoral thesis students, whose work should be developed as much as possible before summer.

The decision to retire next spring was influenced by the fact that Åberg’s wife retired about five years ago. In recent months it seemed that reaching the age of 66 while still in the workforce would increase one’s amount of pension.

After May Åberg plans to spend more time at his cabin and on his sailboat in Virolahti.

He does not plan to quit working, either. Åberg will make a so-called professor agreement with the university. He may take students as he pleases, teach courses and finish ongoing instructions. He will have the same workspace and e-mail.

Åberg considers the arrangement ideal. What he holds of particular value is the way the university treats retirees as resources that can be utilised instead of decrepits.

“Of course, younger people consider me somewhat ‘over the hill’. It is also a part this working community; competition is tough.”