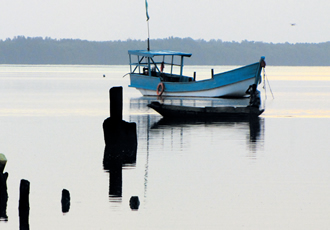 Gambia offers a plenthora of bird life to enjoy for visitors.

I am a little suspicious about bird watching. Like trainspotting and stamp collecting, it brings to mind images of nerdy men in camouflage gear with multiple pairs of binoculars. It just isn’t me. I’m relieved when my guide Amin turns up barefoot, in shorts and a T-shirt and looking quite normal.

The Gambia is a tiny country; a mere 50 kilometres wide and around 400 kilometres long, a thin finger of land carved out of the Senegal. Although it may seem easy to overlook, the Gambia is to bird watching what Italy is to Formula One or Wembley is to football. People travel from all around the world to see the thousand species of birds that breed here, and I’ve decided to join them.

The Gambia has plenty of national parks, scattered from the stunning Atlantic beach coast to the dense mangrove swamps in the far east of the country. Bird watchers can skip from one to another in a hopscotch game of subtly changing ecosystems.

For Europe’s migratory birds the river basin forms a kind of smorgasbord, rich in delights such as grasshoppers, mice, berries and fruit alongside the usual staple of small fish.

After trying one or two coastal parks, I head inland to Bintang Bolong. It offers accommodation in home-made stilt houses perched a few inches above what at low tide is mud and at high tide is a river. My bed sits on a slight angle that suggests that if I roll over at night, I might not stop.

Amin suggests that we head out on foot first, guiding me out through rice paddies and small stands of mango into large, flat fields punctuated by massive baobab and king trees. As the sun begins to set the trees fill with life and sound.

I quickly realise that I might not be very good at this. “See there! At the top of that tree!” Amin shrieks, pointing at some flash of red feathers. “It’s gone” he sighs disappointedly, while I am still trying to figure out which tree he meant.

Much of what he shouts is lost on me. Herons I have heard of, but shrikes? Whimbrels? Rollers? As in Bay City? I have no idea what I am looking for.

I take a number of photographs of empty branches and blurred trees. After an hour my best picture is of a donkey, and that was tied up.

As the light fades it gets a little easier. Either that or the birds are getting bigger. We spot a white heron, some egrets, harrier hawks and a stunning fish eagle on the prowl. 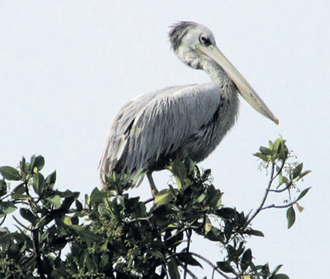 Better still comes at dawn, as I roll out of bed amidst a chorus of fruit bats and into Amin’s waiting canoe.

In the first rays of the sun we spot black hawk-like kites overhead, the odd pelican and the much rarer African darter. On foot at one point we spot plovers and whimbrels paddling in the shallows. Most excitingly, we spot three dolphins breaking the surface en route back to the ocean.