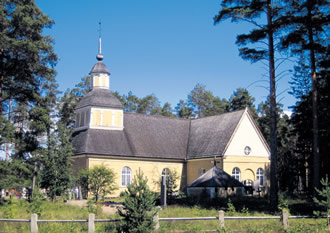 SMACK in the geographic middle of Finland – which, in practice, means far away from the economic and cultural centre of gravity in the south of the country – Kajaani is a quiet town like so many others. Yet its placid nature conceals its crucial role in the formation of the Finnish identity.

Founded in 1651 by the Swedish Governor-General of Finland, Per Brahe, Kajaani is located along the shores of the Oulujoki, or Oulu River. As the capital of the Kainuu region, it was a centre of the tar industry, which accounted for the majority of Finnish exports in the premodern era.

As such, it was protected by the fortifications of Kajaani Castle, built on Ämmäkoski island in the Kajaani River. The castle actually predates the foundation of the city, construction having started in 1604 and completed in 1619, with a further expansion and strengthening of the defences completed in 1666. It remains the smallest stone-built castle in Europe, and the northernmost castle in the world.

In its time, Kajaani Castle served not only as a fortress, but also as an administrative centre and a prison, its most famous inmate being the eminent historian Johannes Messenius, who spent 19 years imprisoned in the castle for conspiring against the Swedish throne.

Unfortunately, the castle now lies in ruins, a victim of the Great Northern War, or the “Greater Wrath”, fought between the Swedish and Russian Empires. In 1716, it was forced to surrender to Russian forces, which blew it up.

Even so, its ruins continue to be a popular family destination, the twisting passages providing an excellent location for children’s adventures. A brisk visit takes no more than half an hour, but it is a good spot for a picnic lunch while the kids engage their imaginations in tales of knights and dragons.

Kajaani has another claim to fame, as the home base of Elias Lönnrot. A famine and pestilence in the region had driven out the previous district doctor, which made it possible for a young Lönnrot to take over and build a thriving practice.

His passion, of course, was the Finnish language, and his profession (and rather forbearing patients) allowed him to take long leaves to tour the countryside, gathering the tales from oral tradition that he would later compile into the national epic Kalevala.