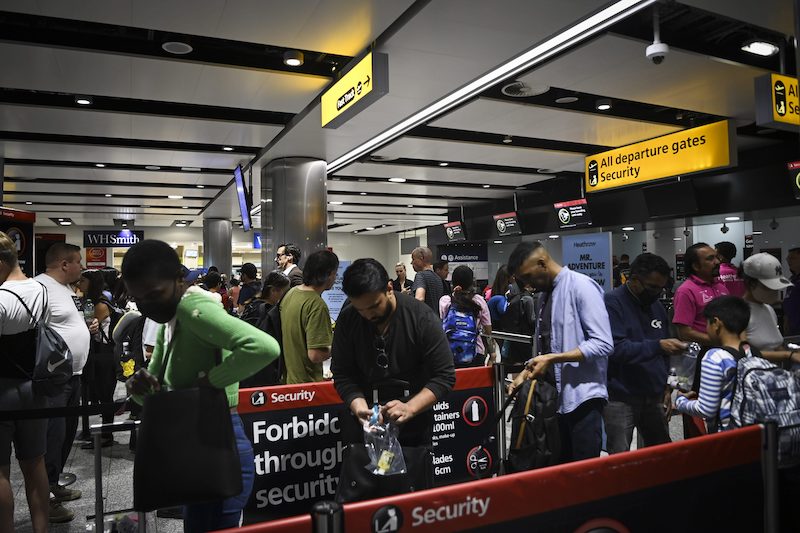 Passengers at the London Heathrow Airport in London, on July 14, 2022.

With multiple news reports of flight cancellations, as airports, suffering with staff shortages, struggle to cope with surging demand, ForwardKeys has taken a closer look at air traffic disruption, by analysing recent trends in intra-European flight bookings for travel in July and August and changes in seat capacity. It shows that a fall in consumer confidence, which began in the last week of May, has rapidly worsened, as last-minute bookings in the week running up to 10th July were down by 44%, compared with 2019 levels. Bookings from Amsterdam were down by 59% and from London by 41%. 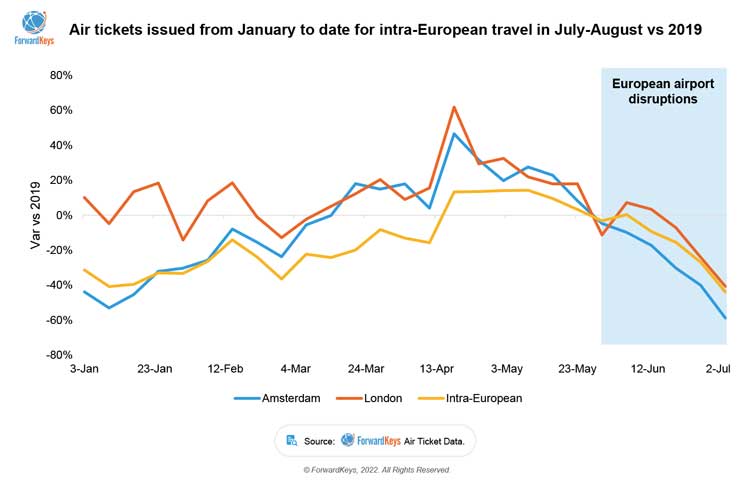 The recent level of disruption to travellers’ schedules is well illustrated by a jump in the ratio of partial cancellations & modifications to total bookings. From 30th May to 10th July, it has almost tripled from 13% before the pandemic (in 2019) to 36% this summer.

The collapse in last minute bookings and the increase in cancellations & modifications is making a significant dent in the travel industry’s outlook for the summer. As of 30th May, total intra-European flight bookings for July and August were 17% behind 2019 levels. However, seven weeks later, on 11th July, they were 22% behind, a slowdown of 5 percentage points.

The destination suffering the greatest relative setback in its summer outlook as a result of the slowdown in last-minute bookings from Amsterdam is London; where bookings have slowed from 3% ahead of 2019 levels in the fourth week of May to 18% behind on 11th July, which represents a drop of 21 percentage points. On the same metric (percentage point drop), it is followed by Lisbon, 18%; Barcelona, 15%; Madrid, 14%; and Rome 9%. Taking the same approach with London, the most affected destinations are Istanbul, to where bookings have fallen by 32%; Palma Mallorca and Nice, 12%; and Lisbon and Athens, 7%. 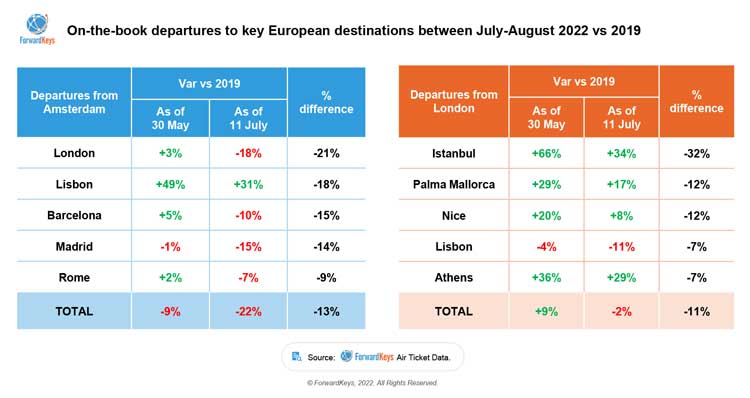 The 5 percentage-point slowdown in intra-European bookings from the last week of May to 11th July is mirrored by a similar reduction in airline seat capacity over the same period. ForwardKeys reveals that, scheduled intra-European seat capacity, has seen a reduction of 5% across the continent, with Amsterdam and London experiencing the largest reductions, at 11% and 8% respectively. 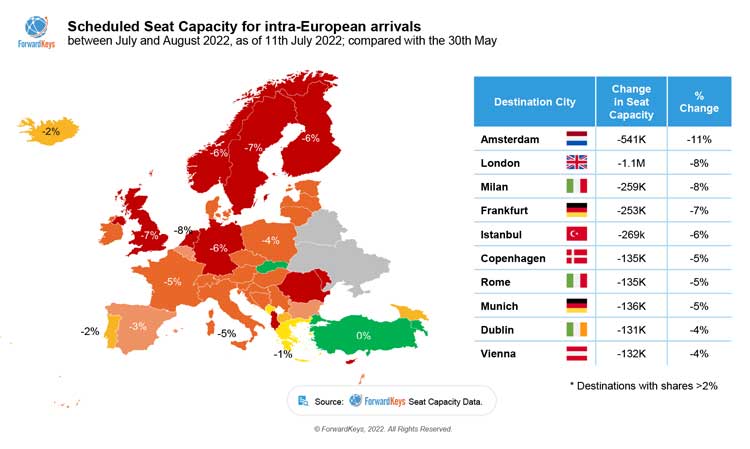 Olivier Ponti, VP Insights, ForwardKeys, said: “One can think about this summer both positively and negatively. On the upside, it is encouraging to see a strong resurgence in demand following the pandemic, with summer bookings in May surging ahead of 2019 levels. That was excellent news for the travel, tourism, and hospitality industries, which badly need the business. However, things have come back so fast that airports and airlines have struggled to cope, which is causing chaos for the travellers whose flights are affected. While we can be confident that airports will eventually succeed in recruiting the staff they need, there are a few trends that give cause for concern. First is the increase in the price of oil, fuelled by the war in Ukraine, which will increase the cost of flying. Second is inflation (also a consequence of the war), which will likely leave most travellers less able to afford the fare. Third, the increased level of disruption is substantially dampening demand, as we are seeing a dramatic slowdown in last-minute flight bookings, plus an increase in cancellations. At the end of May it seemed we would see an exceptional summer for travel within Europe; but now it is more likely to be just a good one.”