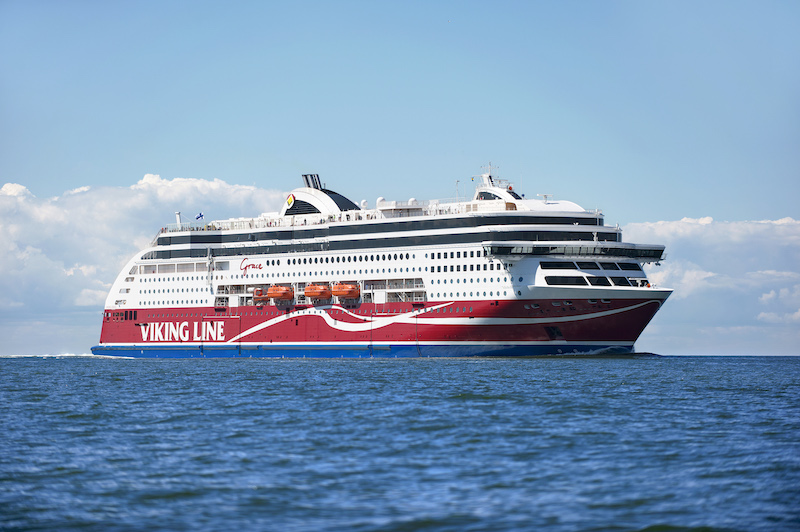 On Thursday 11 November, the nine millionth passenger, Niina Tunturi boarded the Viking Grace in the port of Turku. She was greeted on board according to customary traditions. Master Henrik Grönvik presented flowers, sparkling wine and a cruise gift card to Niina Tunturi, who got to spend her cruise in a nicer cabin.

The modern cruise ship, which embraces green values and is the quietest vessel on the Baltic Sea, was a passenger favourite from the very start in 2013, when it was placed in service on the route between Turku and Stockholm.

“Normally, we have been able to celebrate a new million milestone nearly every year. Because of the pandemic, this time is has taken more than two years, but our sales are now approaching pre-pandemic levels. It was an especially successful summer on the Turku route thanks to people taking local tours to Åland. This autumn, there has continued to be a steady rise in demand, and customers have returned to the vessels. If this trend continues, we will be able to celebrate our ten millionth passenger on Viking Grace at the end of next year,” says Philip Sjöstrand, who is in charge of Viking Line’s B2B sales.

The nine millionth passenger was celebrated at the start of the journey with the customary ceremonies. The vessel’s master, Henrik Grönvik, welcomed the happy passenger with flowers, a bottle of bubbly, a cabin upgrade and a cruise gift card.

Conferences are back on board

“We have great confidence in the future. We made the decision to invest in the autumn programme and have hired quality entertainment for Viking Grace. Early this winter, well-known Finnish artists such as Eppu Normaali, Elastinen, Suvi Teräsniska and ABREU will perform. Good entertainment draws passengers to the sea, and the cruises with big artists usually sell out right away,” says Philip Sjöstrand.

Group and conference sailings on Viking Grace have also seen a significant increase since the summer.

“We have clearly seen how people have missed personal encounters after an extended period of working remotely. People come on board to have a good time, eat, laugh, listen to music and hold meetings together. It will be a good Christmas party season.”

Glory to further expand service on the Turku route

Next year is important for Viking Line, since Viking Glory will enter service in March as Viking Grace’s sister ship on the Turku–Mariehamn–Stockholm route. The new vessel will introduce many new features and experiences not found previously on the Baltic Sea. Thanks to new technology, Viking Glory will have even less of an impact on nature in the archipelago than the environmentally advanced Grace.

“We are really looking forward to Viking Glory. Our popular picnic cruise from Turku to Åland takes on a completely new dimension when the journey to Åland is made with Viking Glory and the return trip is with Viking Grace. It’s a fantastic chance, for instance, for people arranging one-day meetings.”