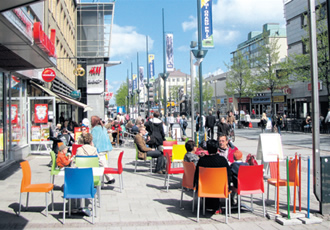 The largest railroad hub in the country is Finland’s gateway to the East.

HAVING been deemed “the most useless” or “the ugliest” city in Finland, the city of Kouvola might have a bad reputation. It is in fact very useful and can be very beautiful, but like many other things in life, in order to understand it today we must look back at its history.

Located in the Kymi province of southeastern Finland, Kouvola began as just a small train station built in 1875, a stop along the Helsinki – St. Petersburg line. Its geographic location was very convenient as a starting point for tracks that ran north to the Savo province and south to the Kotka harbour.

Since then it has become Finland’s largest railyard and most important railroad junction, serving as a transportation hub for goods and travellers heading toward Asia and Europe – a gateway to the East for the European Union. It is also a vital distribution point for the Vyborg-Finland natural gas pipeline.

The city is an important pulp-producing, paper-milling and printing centre and has a leading industrial engineering sector. The academic institutions in Kouvola include a reputable business economics institute with a thriving international exchange student population as well as a respectable music college.

The city has a population of approximately 90,000, covering an area of 2,883 square kilometers of which about 11 per cent is water. In January 2009, its six municipalities – Kouvola, Kuusankoski, ElimäkiAnjalankoski and Jaala – were consolidated, forming the new municipality of Kouvola. It is located 136 kilometers northeast of Helsinki, 90 minutes away by train or car. 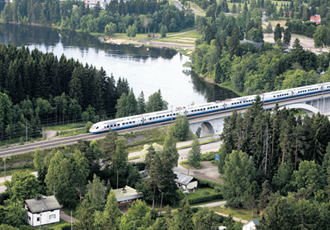 Kouvola’s Repovesi National Park is a beautiful place to go camping or have a picnic for the day. Covered by acres of rugged woods, wild hiking trails and a gorgeous lake, it is considered the jewel of Kouvola.

For some good old child’s play you can visit Kouvola’s Tykkimäki Amusement Park, which has a sky-high ferris wheel and exhilarating water rollercoasters. The historical and cultural sites in Kouvola include the Unesco World Heritage site Verla Mill Museum and the enchanting forest gardens of Arboretum Mustila. There is no shortage of food and restaurants either. You can easily find Chinese, Thai, Spanish, Middle Eastern and Italian food around the city.

Kouvola’s city centre, Manski, is home to various shops and cafes where you can sit indoors or out, to enjoy some coffee and take a moment to reflect on the many things that make this Finnish city anything but useless and ugly. Kouvola is a growing city that welcomes international visitors, has efficient transportation and business sense, and maintains a serene beauty in its natural park reserves.