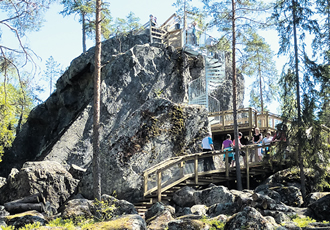 There is no record of exactly how old Pederöre is, but it is one of three original parishes in the Gulf of Bothnia. It was first mentioned in writing in 1348, when King Magnus Eriksson issued a statute concerning trade in the parishes of Korsholm, Närpes, and Pedersöre.

The rivers in Pedersöre have been important in shaping the business history of the municipality, allowing carpenters in the region to become famous for their shipbuilding between the 1500s and the 1800s. Another vital industry in Pedersöre has been the agricultural sector. 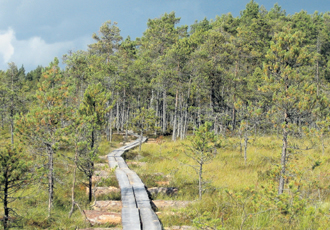 The importance of agriculture to Pedersöre is visible from the many ways that the municipality still pays tribute to it. There are a multitude of museums that demonstrate how farmers have lived in the last few centuries, and how they made their livelihood.

The Fagerbacka farm, for example, is the only one of its kind left in Ostrobothnia. It displays both calm scenery and a traditional environment with graying log cabins surrounded by a fence. It also exhibits the milk industry in the 1900s, a time when cows roamed freely in the woods.

The culture preserve at Lassfolk is another museum where it is possible to learn about the daily life on a farm in the 1800s and 1900s. The museum also describes what it was like when war and modernisation were taking place.

The Bennäs railway station is also an interesting sight in Pedersöre, its style having been preserved from when the railway station was built in 1885. The buildings in the immediate surroundings of the station also date back to the same time period, creating a unique atmosphere.

There are also monuments dating from different time periods, the oldest being one dating back to the stone age.

Pedersöre is a large municipality which includes part of the Kvarken archipelago, but also lakes, rivers and forests. It has many nature trails to follow, allowing the curious to discover its diverse nature. Pedersöre's longest trail is approximately 50 kilometers in length, and is called the Utterleden, or Otter Trail. It winds through the most sparsely populated part of the municipality, exhibiting 'untouched' nature and forests. It also follows the Esse river and Purmo north river. Following the trail will lead you to one of Finland's largest erratic boulders, called 'Lostenen'. There are steps and railings built to reach the top of the stone, so that visitors can enjoy the view.

Another trail is called Skalderna's stig, or Poet's path. It is located in Kiisk, Lappfors. Although the village is small, its cultural heritage is still well maintained. The trail is about 5 kilometers in length, and along it one can find paintings, poems and information about the flora and fauna which can be observed along the trail.

Authors Hjalmar Korkfors and Viola Revall lived by Kiisk for a number of years, where Krokfors was a school teacher. The pair called the path down to the Esse river the Kärleksstigen, or Path of Love. Kiisk still holds a permanent exhibition displaying works by the two authors, and other pieces from their life including photographs and objects that belonged to them.

Yet for something different, one can go fishing in the Esse river, its rapids being a great location for catching fishing grayling, brown trout and pike. Lakes Mosavatten and Stikpiksjön are also good locations for fishing. Surrounding the lakes is also a good place to spot wildlife – including otters, flying squirrels and even mussels.