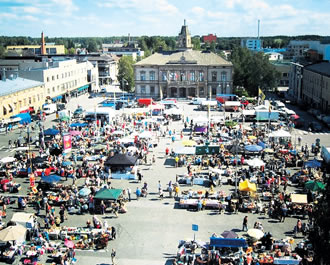 Home of Finnish National poet Johan Ludvig Runeberg, Jakobstad, or Pietarsaari in Finnish, has been an important player in the cultural development of the west coast in Ostrobothnia. It is a bilingual municipality with a majority of Swedish speakers, situated by the sea.

Jakobstad was founded in 1652. On 19 June Queen Christina granted Count Jacob de la Gardie the right to found the town in the parish of Pedersöre, yet after his death the project was taken over by his widow Countess Ebba Brahe. The town was named Jakobstad after the Count, but its Finnish name Pietarsaari pays tribute to the municipality it once belonged to, Pedersöre.

According to a brief history compiled by Guy Björklund for the Jakobstad Museum, the area that now makes up Jakobstad was under the sea two thousand years ago, eventually breaking the surface and becoming inhabitable.

Jakobstad's history is spotted with war, beginning at the Russian invasion of Finland which took place between 1713-1721, known as The Great Unrest.

Jakobstad was invaded and burned to the ground twice, with only a few buildings left sanding. At that time, most of its inhabitants became refugees with the wealthier crossing over to Sweden and others fleeing to forests or the Kvarken archipelago. After Finland declared independence from Russia in 1917, Jakobstad saw an occupation on 28 January 1918 led by Jaeger Colonel Lauri Tiainen.

This eventually led to the disarmament of Russian troops, but not without struggle. After the outbreak of the civil war, or Winter War, in 1939, Jakobstad began to play a role in civil defence. On 22 February 1944, during The Continuation War, Jakobstad was bombed by the Soviets.

Not only has the town seen war, but Jakobstad has also seen a lot of wealth. In 1898 Otto Malm died as the wealthiest man in Finland. He was head of business at the House of Malm, his father having been the head of the board of commerce and one of the most successful merchants and ship owners of the time. Malm also financed half of railways built to reach Jakobstad in 1886.

As a town by the coast, shipbuilding became an important industry. In the 18th century Jakobstad became the biggest producer of new ships in Finland. Being granted navigational rights – rights to sail directly to foreign ports – in 1765 was an important step in the development of many towns on the coast of Bothnia, including Jakobstad. The new rights opened new trading routes for the Finnish shipping industry. In 1782, frigate Concordia was the first Finnish ship to sail in the East Indies. The barque Hercules, built in Jakobstad, became the first Finnish ship to sail around the globe between 1844 and 1847.

Other traditional industries included the export of tar, pitch and products from sawmills, which contributed to making Jakobstad a wealthy town. Towards the end of the 19th century, the town became industrialised- beginning with a chicory factory in 1883. In the 20th century the pulp and plastic industry became important to Jakobstad. Currently Jakobstad has a thriving industry of wood, pulp, ship building and food products.

The Jakob's Days festival attracts tourists and locals to Jakobstad in the summer to enjoy theatre, concerts and other events. The first Jakob's Days were celebrated in 1976 to promote tourism, and consisted of song, music and sport.

Museums to visit include the town museum of Jakobstad, the Arctic Museum and the Chicory museum.

The Chicory museum is the only one of its kind in Finland, and is situated in an old chicory factory dating back to 1893 and allows visitors to view how chicory, a caffeine-free additive, was produced and taste chicory coffee. It is also possible to visit Runeberg's cottage, built by Johan Ludvig Runeberg's mother's brother Mathias Mattson Malm and his father Lorenz Ulrik Runeberg in 1811.

Situated by the coast, Jakobstad has a beautiful archipelago to visit with beaches and harbours along its coast. It is also known for its parks and gardens, such as the Vicar Aspegren's gardens at Rosenlund and the School Park botanical gardens, established between 1915-1932. The garden boasts a thousand different kinds of plants.