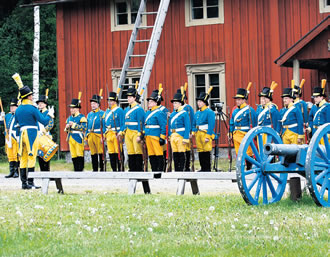 On the coast of the Gulf of Bothnia lies a municipality which played an important role in Finnish history – both in its occupation by Russia, and its independence. Vörå, or Vöyri in Finnish, is a bilingual municipality with a majority of Swedish speakers. It is incidentally also where Jean Sibelius got married.

Until 1809, Finland was under Swedish rule. One of the main battles to change the fate of Finland was the battle of Oravais, which took place in Vörå during the Finnish War of 1808-9. During the course of the battle, Russian troops attacked the Swedish troops located in Oravais, causing the latter to retreat. The Battle is considered one of the bloodiest of the war – it is estimated that there were at least 1,000 Finnish and Swedish and 800 Russian casualties. The battle was also a critical one for Finland’s future – losing it meant becoming part of Russia.

Tourism entrepreneur Jussi Mendelin explains that the island of Västerö, on the coast of Vårö, has been a strategically important location.

As the first world war began, so began plans to actualise the dream of an independent Finland. About 2000 Finns travelled to Germany to join the Jägers military movement to get military training. To avoid the Russians they used secret roads, one of which passed through the island of Västerö. As such, it was an important area for the beginnings of the Finnish Jäger Movement.

Finnish fighters were then secretly trained by returning Jägers in Finland. They didn’t, however, have weapons until 1917. In late October, a German occupied English ship called Equity left Danzig, laying their anchors by the beach of Västerö four days later. Weapons were unloaded with success, and the Russians didn’t find out.

A week later, Lenin led the Bolshevik revolution in Russia. On 6 December the Finnish parliament declared independence, yet struggles beginning on 27 January to remove the Russians or ‘reds’ from Finland continued until Finnish general Mannerheim was able to declare the war over on 16 May.

The Fänrik Ståls centre in Vörå is an officer’s residence from the Swedish period. It provides a tour of the area where the Battle of Oravais took place.

An old Colonel’s residence called the Tottesunds mansion is also nearby, its ancestry dating to the 1600s. It was used as an administrative building in the late 1900s and early 2000s and is currently used as the board office of building and environment. On 10 June 1892 Finland’s national composer Sibelius married Aino Järnefelt at Tottesund.

Vörå also has beautiful churches and museums to visit. The Vörå Church is the oldest wooden church in Finland, built in 1626.

The Maxmo Church was built in 1825 with a belfry which was part of an older church built in the 1700s. Museums include, among others, a doll and Christmas elf museum and an old school museum.

Vörå is also host to a stone park which holds over one hundred pieces of stone gathered from mountains around Finland. The oldest piece is approximately 3500 million years old.

There are many nature trails to follow in Vörå, where it’s possible to find a varied nature including bays and forests. Following the trail in Västerö, one will also find a beautiful view of the Mickelöarna, or Mickel islands, and the open sea.

The Mickel islands are part of the Kvarken archipelago, and are part of a protected UNESCO world heritage site.