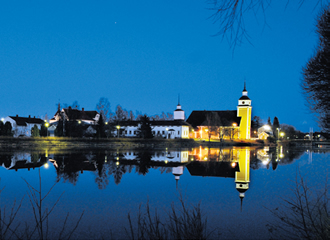 A river flows idly through a town in the Ostrobothnia region. A historic railway marks the spot of the harbour. The town is called Nykarleby, and is the centre of the Nykarleby, or Uusikaarlepyy, municipality.

The Nykarleby district was formed in 1607 by connecting parts of Pedersöre and Vörå, and became an official municipality in 1620 through the initiative of King Gustav II Adolf. The growth of the new municipality, however, was slow. It only began to flourish in the late 1700s.

Situated at the edge of the sea, its location was strategic, and as thus its history is saturated by war. The Jutas battle during the 1808-9 war was fought just four kilometres south of the city's current centre. Once peace settled, the town of Nykarleby began to fare better. Shipping, ship building, and trade began to grow. The economic pinnacle of the town took place between the 1830s-50s, and stagnation followed a fire that nearly burned down the town in 1858.

For a long time, Nykarleby was the smallest town in the country. It only had a population of approximately a thousand people, and a size of 21 square kilometres. In 1975, however, Nykarleby, Jeppo and Musala were merged with the town, and both the land area and population increased in size. Munsala and Jeppo later became independent communities.

In the 1900s, Nykarleby switched from an agricultural town to orientating towards industry and services. Currently, Nykarleby has an export oriented small business culture. Businesses include carpenters and builders.

One of the largest employers in Nykarleby is Prevex Ltd Oy, a manufacturer of food packaging and plumbing products. Another large employer is woodwork company Westwood Ltd.

Nykarleby is also a world leader in producing fox and mink fur. Among producers are Oy Monäs feed Ab, created in 1957, which is the nation's oldest mink and fox fur manufacturer.

Every August, Finland's largest car-boot garage sale is held in Nykarleby municipality, in an area called Juthbacka. The market is called the Juthbackamarknad, and attracts around 30,000 visitors yearly. An American car meeting is also annually held at Juthbacka.

Rustic boats float through the town during rowing festival Monäs-rodden, which is also celebrated in the summer months.

The Nykarleby railroad was opened in 1899. It connected Kovjoki to Nykarleby town and its strategic harbour. The railroad, however, wasn't in use for long. At the eve of the first world war, many Finnish railways were obliged to give free transport to the Russian military. The Russians also confiscated many railways for their own use. Once the rumour spread that they would also appropriate the Nykarleby railway, a quick decision was made to sell it. In 1916 the deal was finalised: the railway was closed and sold.

In 1986 the Nykarleby Railroad project began, reviving the old tracks; it's currently possible to take a ride on a historic Nykarleby train.

The municipality also offers many museums and historical churches to visit. These include the St. Birgitta Church, and the churches of Munsala and Jeppo.

The Kuddnäs museum shows the childhood home of Zacharias Topelius. The Nykarleby Museum, established by Josef Herler, displays the trading and seafaring traditions of the old town, styled in the fashion of a house of the upper classes. The school museum exhibits the first school of Swedish speaking Finland, founded in 1862.

Nykarleby offers a diverse natural landscape. It is situated at the mouth of the sea. A river also flows through the Nykarleby town, forests line its outskirts, and the countryside is scenic.