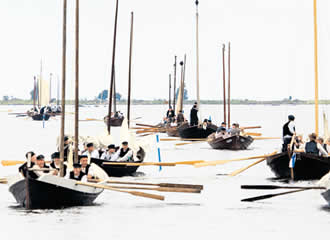 Korsholm, or Mustasaari in Finnish, is located in the Ostrobotnia region. The municipality has a majority of Swedish speakers. Over half of the Kvarken archipelago region, a UNESCO World Heritage site, is located in Korsholm.

Korsholm first appeared in historical documents in 1348. For many hundreds of years, Ostrobotnia was governed by Swedes from the Korsholm region. The modern Korsholm municipality was established in 1973, with the integration of five communities.

A hundred years ago, the archipelago was rife with craftsmen – tinsmiths, potters, stone carvers, millers and apothecaries, to name a few. An exhibition of these early industries can be found at Stundars Craftsmen's Village.

An annual event commemorates post boats from Björkö. The post boats were a fleet comprised of individuals from Björkö with the responsibility of carrying mail throughout the Kvarken area. In return, they were granted exemption from military service and reduced taxes by Swedish King Gustav II Adolf. The post boats roamed the seas until 1809, and the residents of Björkö had to resume their services to the military and paying taxes. At the commemoration event, boats characteristic of those used in the 17th century sail through the archipelago.

Korsholm is home to the second oldest stone bridge still in use in Finland, situated in Toby. It exhibits bridge architecture from the 18th century. Its twin arches were risky business at the time – the job was given to convicts sentenced to life in prison. The convicts were promised freedom if they succeeded in removing the centre without the bridge collapsing. The bridge has been standing since 1781 – it was clearly built by some motivated hands!

Finland's longest bridge at 1,045 metres, the Replot bridge, can also be found on Korsholm. It connects the archipelago with the main land, where until 1997 only ferries were used.

There are many beautiful churches to visit in Korsholm, the main church being situated in Gamla Vasa, or Old Vasa. It was built in 1786 as a courthouse, and rebuilt as a church in 1863. There are two museums in Replot and Björköby, and a boat and fishing museum in Södra Vallgrund for more historical experiences.