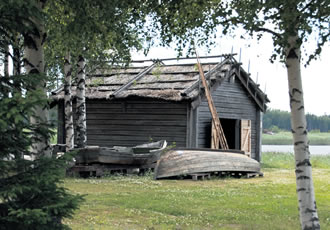 Malax, or Maalahti in Finnish, is a municipality in the Ostrobothnia region and part of the Vaasa sub-region. It is a bilingual municipality with a majority of Swedish speakers. Its unique nature has allowed it to become a UNESCO (United Nations Educational, Scientific and Cultural Organisation) World Heritage site.

Located in the archipelago and in close proximity to Vaasa, Malax has an interesting nautical history. The history of Malax has been affected by war since the 1700s, their harbours creating interest among merchant ships heading towards Vaasa.

New business opportunities have arisen with the recent inclusion of Malax in the list of UNESCO World Heritage sites. Business has been created in the tourism and restaurant industries, and in an effort to teach about the culture and unique nature of Malax, and general world heritage pedagogy.

A nature path will take you right back to the Iron Age – just follow the 'Iron Age Trail' to discover preserved artefacts such as cairns and cup stones that date back to the years 200-700 AD. You'll also come across a cottage displaying information about the archaeology, and a cow house which exhibits agricultural implements.

Malax also boasts one of the largest boat museums in the Nordic countries, the Kvarken Boat Museum. It displays a collection of 76 wooden boats, dating from the years 1850-1993. Another museum to visit is the Brinken Museum, which displays a farmhouse from 1879. In the summer, it is also possible to see a garden that has recently been restored to the way it looked in the year 1930.

A charming local legend names the Malaxians the 'big eaters'. The story goes as follows: A man from Malax was going to spend a week in Ribäck to work in the forestry industry. He ate a big breakfast before his trip, and then set off on the adventure with a bucket of sour milk and bread to last him the week.

Halfway to Ribäck, however, he sat down to rest. He decided to taste a piece of sour bread, which was 38 cm wide and 15 cm thick. Soon, there was nothing left of the bread. "Now I need to be careful," he thought to himself. He spent the whole week in Ribäck without food. When he came home, he told his wife what had happened. She couldn't keep her mouth shut about the incident – which is when people began to call the Malaxians the big eaters.

In 2006, the Malax and Korsnäs municipalities were added to the World Heritage List of UNESCO. As such, they joined the neighbouring High Coast area which had been included as a world heritage site in the year 2000. There are two types of world heritage sites, the cultural and the natural; it is possible for a site to be both. The High Coast - Quark area is of the latter type. The uniqueness of the High Coast-Quark area is based on its natural geological formations, such as the skull caps and the De Geer moraines.

Becoming a world heritage site means that the area needs to be protected, preserved and be made available for tourism, to allow visitors to see the unique nature that the area offers. That said, there is plenty of nature to see when visiting Malax. In an effort to make it easier to experience the natural rocky archipelago in Malax, the Rönnskär pilot station has been made into a nature station.