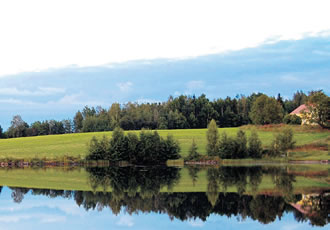 Kronoby, or Kruunupyy in Finnish, is located in the Ostrobothnia region. It is a bilingual municipality, with a Swedish speaking majority. It boasts beautiful nature, a plethora of museums, and a friendly – and humorous! – population.

In 1969, Kronoby, Nedervetil and Terjärv municipalities married up to become Kronoby municipality. The aim of the unification was to create a strong community with a high level of service and discretion. Since 1983, the municipality has been a bilingual one.

Craftsmanship has strong roots in Kronoby. The town of Kronoby boasts both a ceramics shop and a glass shop. The origins of the businesses can be observed at the various historical buildings and museums in Kronoby.

Their website describes the inhabitants of Kronoby as a people with 'genuine humour and language'. Over the years the municipality has brought many poets and beautiful poems. It is often said that their people know how to tell stories like nobody else. Not only is poetry rife but the culture is riddled with song and theatre, amounting to a lively community. You might, however, have trouble understanding their accents, which have a ring to them that may sound foreign to those accustomed to southern Finnish and Swedish accents. Nonetheless, their friendliness and sincerity should not be difficult to misunderstand, reminds their municipality pages.

Kronoby also has plenty of historic buildings and museums to visit. There is a 200 year old rectory, which has developed in to a museum over time. It is set in an idyllic landscape, and provides a glimpse in to the long history of Kronoby. The museum area includes a school museum, a husbandry museum, a soldier museum and a dugout. There are also rooms dedicated to remembering H.G. Porthan, J.L. Runeberg, and Annie Krokfors.

On the island of Cronoholm, one can visit the remains of an old wooden ship carving shop, which existed from the years 1674-1703. Tolvmansgården is also very close by. It is the local history society's museum, and has gathered buildings from the 1800s and 1900s and displays both home and agricultural appliances and crafts. In early August the location also hosts an old-time themed market, organised yearly.

One also has the possibility to visit a church built in 1822 with a belfry dating to the year 1660. Its architecture is based on the drawings of senior curator C.F. Fredenheim. The building itself is constructed by H. Kuorikoski.

Korpeholm is a region in Kronoby which also has a fascinating history. In 1628, Governor Johan Månsson Ulfsparre was given an assignment to construct a hospital for those suffering from leprosy on Korpeholm. It was a controversial move at the time, and was not happily received by all, particularly by Malax in the North, as a leper hospital already existed in the South on an island called Själö.

At the start, the hospital in Korpeholm was mainly for lepers, but at the beginning of the 1700s patients with mental illnesses, suffering from blindness, and other poor people stricken by illness were also accepted at the hospital. What is left of the hospital is a memorial by the old cemetery of those buried between the years 1631-1828.

Kronoby is situated in a river valley. The two streams, Kronoby stream and Perho stream, cross through the municipality. Yet the sea is not far away, allowing for a diverse range of natural landscape and experience. Although the town is lively, it is easy to find a silent spot not far away from the hustle and bustle of town life.