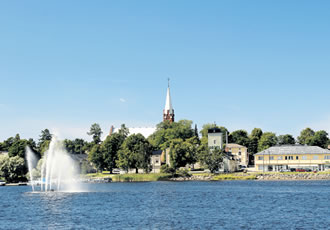 Kristinestad, or Kristiinankaupunki in Finnish, is located by the Gulf of Bothnia, and is a part of the Ostrobothnia region. It is a bilingual municipality where the majority of the population speak Swedish.

Count Peter Brahe founded Kristinestad on the Koppö island in the year 1649, having noticed its potential for a port. The Swedish Queen Christina signed the charter of the town, becoming the namesake of Kristinestad. The 'Lilliputian' new port grew slowly until it established itself as a trading hub in the 18th century.

In 1792 the city was given staple rights, the right to require a passing ship either to pay customs or sell part of its cargo at the market place. As a result trade grew rapidly, and the market place of Kristinestad has been lively ever since. The town flourished with industries in ship building, seafaring, leather factories, breweries, fishing and various workshops, appealing to the bourgeoisie and artisans. Previous exports included tar and timber.

Currently, Kristinestad specialises in potatoes – making approximately 20 per cent of Finland's potatoes. Fishing is also prevalent, with two fishing harbours: Sideby and Skaftung. Services, industry, agriculture and forestry are at the core of the city's business. Small local industries are central to everyday life. Forest machinery is also exported.

Kristinestad is known for its low wooden houses and narrow alleys. The houses, 300 of which are protected by city plan regulations, are painted in an array of colours and have beautifully preserved history. Many of the houses in the old town date to the 18th and 19th centuries. The street plan of the Renaissance period also still exists, although the last hundred years of architectural development is also evident in the different styles of wooden houses.

Perhaps the most spectacular are the Empire style merchant's trade buildings. The houses by the seaside were home to ship owners and other bourgeoisie. The houses diminish in size the farther their distance from the coast, following the social classes of the time. Wells around the city have also been protected. There are also two customs houses built in 1680 and 1720, as historically, there was a cost to enter the town.

Kristinestad also has a 300 year old Ulrika Eleonora church, and the famous "Cat Whipper's Alley", or Kattpiskargränden. The Wolf Cave is a short drive away, where signs of human habitation 120,000 years ago have been discovered. The city still has a busy market square at its heart. Leading to the square is a 300 m stone bridge, opened to use in 1845.

Kristinestad is Finland's first Cittaslow community. The philosophy of Cittaslow focuses on improving the quality of life by slowing down the pace in the community, and building sustainable development. The concept began in a small town in Tuscany, and has become an international network of towns.

Cittaslow is part of a global trend called the Slow Movement. Criteria for becoming a Cittaslow town include, for example, hospitality and locally produced food. Cittaslow emphasises the value of art, theatre, and of course cafes and restaurants. As such, Kristinestad boasts museums and galleries, and a vast array of bistros to choose from. In general, Kristinestad provides an escape from the frenzied everyday life that is often characteristic of modernity.

Kristinestad boasts islands, flourishing gulfs, lakes, two river valleys, glacially formed cliffs, and forests. There is a nature walk near the centre of the town, where one can see wetlands, gulfs, and forests. One can also embark on a journey on the smooth cliffs, and admire the sea from above. Boaters have the possibility to see the rough red granite rock that rests below the Yttergrund lighthouse in Sideby.