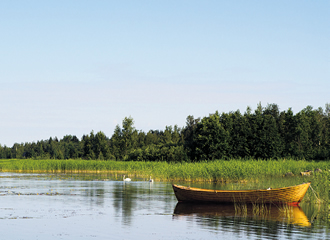 Larsmo was founded in 1867. It borders Lake Larsmo to the East, the Gulf of Bothnia to the West, the City of Karleby in the North and the City of Jakobstad in the South. The road connecting the island based municipality to the rest of the world is called the road of Seven Bridges. The largest islands are Larsmo and Eugmo. The main residential areas are Risö, Holm, Eugmo, and Bosund.

For a brief moment in history, Larsmo claimed international fame with the mysterious Grafton Affair. In 1905, as Finnish separatist movements were gathering momentum, the ship S/S John Grafton was organised to bring weapons to aid nationalists in an armed uprising against Tsarist Russia, which Finland belonged to at the time. It was bought by a Japanese army officer, enemy to Russia.

The next morning as the Grafton was disembarking, however, it ran aground. It was decided that the ship had to be blown up before the Russians would find out about it, so it was transported close to Sweden and exploded at 4 pm on 8 September.

Soon after the incident, newspapers across the country reported on the mysterious exploding ship. The story was even picked up by international media, including the Times, Deutsche Tageblatt, and the Daily Mail.

Although the effort failed to some extent as a lot of weapons were lost, the Grafton Affair is often referred to as the first step towards the fight for Finnish independence.

The service industry makes up 55.9 per cent of the labour force in Larsmo, along with small local industries. The importance of traditional industries of fishing, hunting and agriculture have diminished over time. An important industry in Larsmo is the boat building industry.

There are two museums in Larsmo, the Bjärgas local museum, and the Bosund boat and fishing museum. The Bjärgas museum includes a village shop from the 1950s, and displays local war history. The surrounding area also features a windmill and a carpenter's workshop. The boat and fishing museum displays boats, engines, hunting and fishing gear. Larsmo also has a church built in 1787 by Jacob Rijf, located in a picturesque area.

Larsmo is twinned with two cities, Klaebu in Norway and Malå in Sweden. The concept of twinning cities is an aim to promote culture and trade among cities across international borders.

Two thousand years ago, the first cliffs that currently make up the islands of Larmso appeared above the ocean. Located in the archipelago, Larsmo tempts tourists with forest trail and beautiful coastal scenery. There are possibilities for hiking, fishing, canoeing and biking.

Köpmanholmen is a recreational area situated on an island at rowing distance from the mainland of Larsmo. There is also a taxiboat if you don't want to brave the Finnish waters. It is a perfect place to visit in the summer, its kitchen offering the delicious traditional salmon soup and other treats.