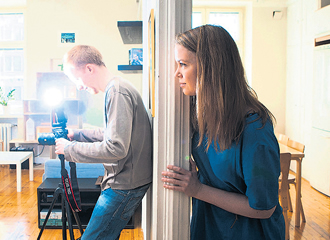 Before hotels, travellers spent the night in people’s homes. The phenomenon is making a return.

Would you let strangers into your home for a fee? And could you stay in a stranger's home?

More and more Finns do and could. The Internet enables the temporary renting out of homes more easily and safely than before. People can read the reviews of others on lodgings, and holiday home agents ensure that the money does not go to fraudsters.

A popular dealer of holiday homes is the American website Airbnb, which aims to expand its activities in Finland.

"There is a lot of demand for flats in Helsinki," says Aja Guldhammer, the company's Nordic Country Manager, via telephone from Copenhagen.

According to Guldhammer, Airbnb monitors the attractiveness of sites based on, for example, the kinds of searches that are done on their pages. A lot of searches are done for lodgings in Helsinki – but there are still not many on offer.

The offerings are also growing. This year, the number of Helsinki flats on the website has risen to nearly 700.

One of the new sites is located on Kaarlenkatu in Kallio. A thrift store & coffee shop combination, which probably interests urban tourists, is downstairs.

Software entrepreneur Rémi Lanvin rings the buzzer and steps into the hallway. The Frenchman has photographed Helsinki flats part-time for the Airbnb website already for a few years. Recently, there has been much more work. Also this Saturday, he is scheduled for two shoots.

Airbnb pays the photographer's fee. Lanvin receives specific instructions from California on the types of photographs he must take. One of the new demands is an outside photograph of the building. The Finnish climate often makes taking it difficult.

"I complained about it to California, where they told me to set up shoots only for sunny days," Lanvin says and laughs.

Architecture student Krista Meskanen's home on Kaarlenkatu looks and smells clean. "Of course I would clean it also before guests arrive," she says.

One of Airbnb's essential features is that both the hosts and guests may leave reviews of each other on the website for others to read.

At the Meskanen home, Lanvin digs out the camera and goes to work.

"Could you turn on all the lights possible?"

The flat has a kitchen and a living room with an alcove. There are only two doors: to the bathroom and the hallway. This is why Meskanen and her boyfriend rent out the flat only when they are away. They assume the guests want some privacy.

On the Airbnb website, one can choose whether one wants to rent out the whole flat, a private room or a shared room.

Meskanen's two sisters have also advertised their homes on the website. The other one just rented out her home during a Lapland trip – and received the money for lift tickets and train trips.

Meskanen thinks it is natural to let strangers into your home. She also likes to have guests in her home. Her work colleagues, for their part, have been surprised.

"Many have said that they would never let a stranger into their home."

Accommodating travellers in homes is a phenomenon older than hotels. These kinds of inns existed already in ancient Rome. Big hotels became common only in the 1800s," says Pirjo Sanaksenaho, professor of building design at Aalto University.

In many countries, the phenomenon never disappeared. In the German-speaking Europe, "Zimmer frei" signs advertise available rooms. England, for its part, promises the traveller a bed and breakfast.

Sanaksenaho estimates that the Finnish home began to change into a more private space at the same time as servants disappeared from homes, i.e. from around the 1950s. It also changed the architecture, as the servants' rooms disappeared.

Now Finns may spend the night in a hotel, even if they have relatives or even acquaintances in the city.

"The old bourgeois flats had separate entertainment areas and public zones. The functionalistic flat, for its part, has spaces only for family members."

Airbnb's whole website is a massive visual archive, which tells how people around the world live. It has homes from New York to Nepal.

Sanaksenaho thinks homes are opening up again because of the cultural change brought about by social media.

"We are not so afraid any-
more to show photographs of ourselves, our family and home. The same thing shows in the architecture. There are glass balconies and large glass walls, through which we are, in a way, visible all the time."

According to Sanaksenaho, the openness shows especially in the housing architecture of Denmark and the Netherlands.

Krista Meskanen, who has lived in Denmark, is not surprised either that Copenhagen has ten times as many Airbnb flats as Helsinki. "Sharing flats is more common there anyway. Many of my friends were subtenants."

Amsterdam, for its part, is one of the first cities to have an agreement on the rules of operation with Airbnb.

Rules are needed especially in cities suffering from a lack of housing. At worst, Airbnb and its competitors take away permanent housing from people. On the website, also real estate investors may deal flats, which may reduce the number of flats offered on the city's rental market. In popular destinations, more money can be charged from tourists than from permanent tenants.

Nordic County Manager Guldhammer says that the company has done studies in different cities on how many people are renting out their own homes. According to the results, the clear majority of the flats are homes.

Airbnb is fighting its most important battle against authorities in New York. The renting out of an entire apartment is often illegal there.

In Helsinki, one would think the authorities would welcome Airbnb. A month ago, Tuulikki Becker, managing director of Helsinki Travel Marketing, said in Helsingin Sanomat that Helsinki is losing out to Stockholm and Copenhagen in the number of travellers due to the city's lack of accommodation capacity.

In Finland, in addition to Helsinki, there are Airbnb sites around the country: from Savonlinna to Kangasala and Sipoo to Rovaniemi.

Tuulevi Aschan, 48, has taken travellers into her home in Mikkeli's Ristiina municipality for a year. First she tried out the accommodation herself in Amsterdam and Copenhagen. Initially, she heard about the website from her friend, who had used it in New York.

"I was inspired to put up my own advertisement. We have space when it's just my husband and I in the house. The children's rooms are mainly empty now that they have moved into their own places," Aschan says.

In the summer, also the lakeside sauna's electricity-free space is in use. It is exotic. During the year, it has had about 15 visitors, while receiving twice the amount of enquiries.

"I just printed out the receipts of the payments I've received for the tax authorities. It's easy to access them."

The most memorable visitor has been the Australian Margaret, who postponed her return flights in order to spend more time in Ristiina. She wanted to row around the peninsula, pick blueberries for her morning yogurt and meditate on the dock.

"At the time, I was working from home, and at times we sat on the porch with cups of tea, talking and making the world a better place."

That is the best thing about home lodging. Strangers become acquaintances.