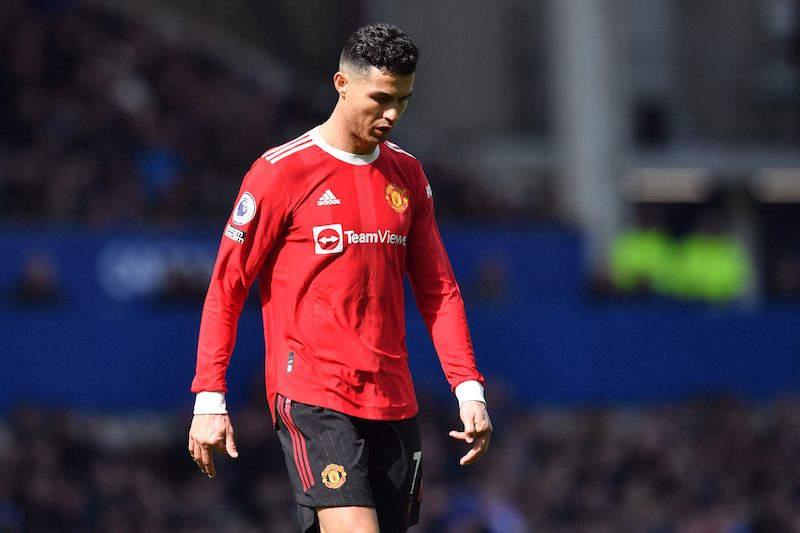 Merseyside Police is investigating an incident where Cristiano Ronaldo apparently slapped a mobile phone out of a fan's hand as the Portuguese left the field after Manchester United's loss at Everton. Footage taken by @EvertonHub, shows Ronaldo knocking the device to the floor after Everton's 1-0 victory over the Red Devils at Goodison Park.

Merseyside Police have now launched an investigation, a spokesperson confirmed. "We can confirm that we are liaising with Manchester United Football Club and Everton FC following reports of an alleged assault at the Everton v Manchester United football match at Goodison," a statement read as per Sky Sports.

"As players were leaving the pitch at 2.30 pm, it was reported that a boy was assaulted by one of the away team as they left the pitch. Inquiries are underway and officers are currently working with Everton Football Club to review CCTV footage and are carrying out extensive witness enquiries to establish if an offence has taken place.

Fans are an essential part of professional sports bringing billions to the industry. Manchester United have the highest digital value (€212,64m) in the world of sport despite Real Madrid and Barcelona’s larger online following. Barcelona comes second with €179.7m and Real Madrid comes third with €116.2m. Recently, Fanatics, a startup focusing on sports merchandise where fans can buy collectables, including jerseys and apparel tax-free and without registration raised $1.5 billion with a valuation of $27billion.

After the incident, Ronaldo acknowledged what had happened and issued an apology to the affected supporter.

"It's never easy to deal with emotions in difficult moments such as the one we are facing," he wrote in an Instagram post.

"Nevertheless, we always have to be respectful, patient and set the example for all the youngsters who love the beautiful game. I would like to apologize for my outburst and, if possible, I would like to invite this supporter to watch a game at Old Trafford as a sign of fair play and sportsmanship," Ronaldo added.

Coming to the match, Anthony Gordon's first-half strike was enough for Everton to beat Manchester United 1-0 at Goodison Park and boost their hopes of Premier League safety.

Marcus Rashford twice went close for Man Utd but he was denied brilliantly on both occasions by goalkeeper Jordan Pickford. Everton took a fortuitous lead just before the half-hour through Gordon, whose shot deflected off Harry Maguire and went in.

Man Utd rallied in the second half but Paul Pogba and Cristiano Ronaldo were kept out by Pickford as Everton held on for a vital three points. The first win in three matches keeps Everton 17th, now with 28 points, four clear of the bottom three.