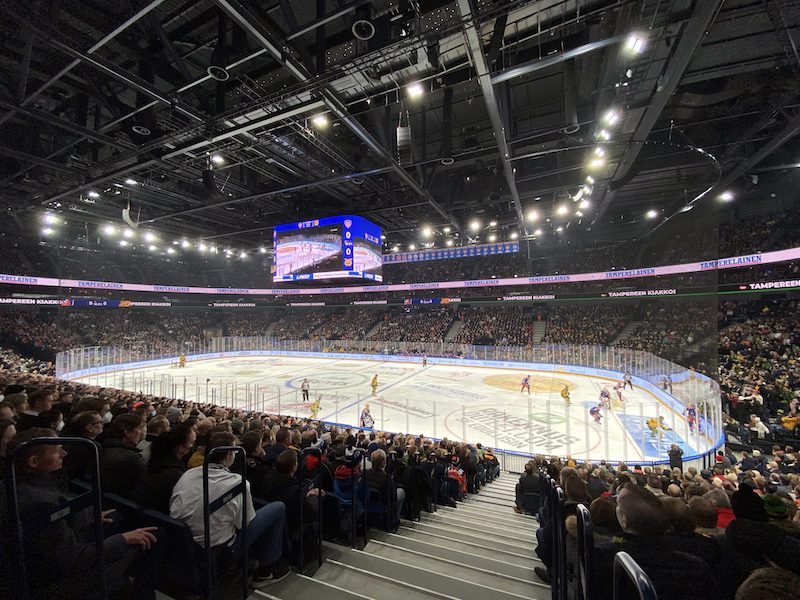 Ice Hockey Liiga match between Tappara and Ilves at the new Nokia Arena in Tampere on 3rd of December 2021.

Liiga or SM-liiga as it was called before 2013, is the top professional ice hockey league in Finland. It is one of the six founding leagues of the UEFA Champions League and is currently allocated the maximum number of five seats, based on the success of previous editions.

It was created in 1975 to replace SM-sarja, which was basically an amateur league. Liiga is not directly regulated by the Finnish Ice Hockey Association, but there is a cooperation agreement between the federation and the association. SM is a common acronym for Suomen mestaruus, "Finnish Championship”.

The 2021–22 season will be the 47th season of the Liiga. Matches of this season which started last autumn, will continue into March and maybe April (due to Corona postponements and restrictions) this year.

A new ice rink named Tampere Deck Arena (Nokia Arena) was opened in Tampere last December for the use of Ilves and Tappara. Two matches will be played in the new arena on February 19, when Ilves hosts his own in the afternoon and Tappara in the evening.

Emotions fly high in Finland for home teams during the Liiga matches and many fans also put their money where their mouth, is by betting on their favourite teams using sites which give users the possibility of comparing odds and reviewing info on teams.

List of the participating teams and the full list of the players with information about their place of birth, nationality, age, weight, height and shoots can be found here.

Although the vast majority of players in Finnish clubs are Finns; players come from different nationalities with Sweden contributing 20 players, USA 9, Russia 7, Slovakia 4, France 3, Slovenia and Norway each with 2 players.

Omicron has also complicated the schedule of Liiga matches. It is not uncommon that a match has to be postponed because of players getting exposed to the virus or being in quarantine because of actually getting infected.

This is what happend to Ilves and KalPa players, resulting in the postponement of 5 season matches being moved to the future. The postponed matches are:

There were also reports of Tappara players contracting the Coronavirus, resulting in the clubs weekend matches being moved to the future.

The full list of matches can be found here.