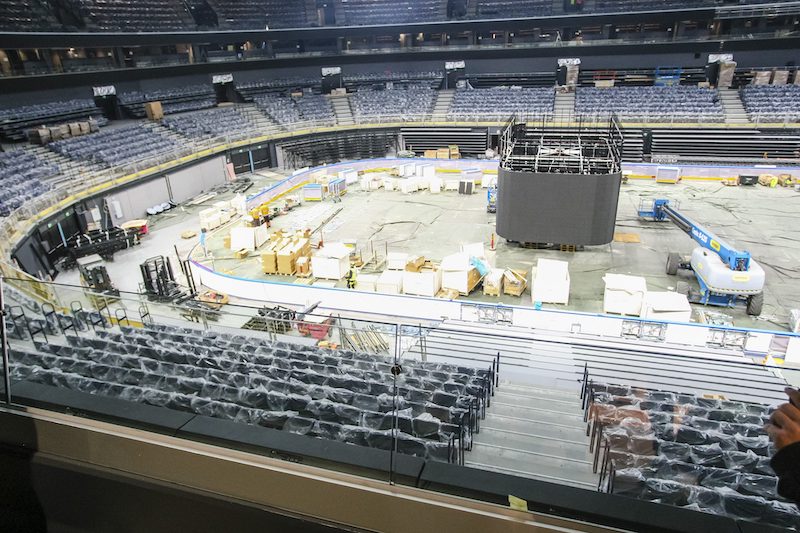 A multi-purpose arena topped by the City's tallest residential towers has been built above the railway tracks in the heart of Tampere. The Deck and Arena project, connecting two neighboring districts, aims to become a 24-hour living room for the Tampere inhabitants. In addition to the residential elements, the complex houses various spaces for private and public use.

The multi-purpose arena will open its doors in December 2021

The experience arena, designed by the top American architect Daniel Libeskind, will be completed in the heart of Tampere in December 2021. The first event, an ice hockey game, is scheduled to take place in early December, and the official opening ceremony will follow soon after.

The partner network will also start its business operations at Tampere Deck and Arena in December. Both Tampere league teams Ilves and Tappara will use the Tampere Central Arena as their home base. The extensive partner network, including the hotel chain Lapland Hotels, the restaurant operator NoHo Partners, Veikkaus Casino, and Lippu.fi will also have their business premises in the arena complex. In addition, Tampere Deck and Arena offers a world-class setting for concerts, conferences, fairs, and other sports and show events.

Cooperation contract with Tappara and Ilves

The Tappara and Ilves teams, currently preparing for the league season 2021–2022 and the farewell autumn at Hakametsä Ice Rink will move to play at the new Tampere Deck and Arena in December. The Tampere-based league teams, the primary users of the arena, will start on the fresh ice on Friday and Saturday, December 3-4, 2021, with local games kicking off the season on the virgin rink of the Tampere Deck and Arena.

- We look forward to introducing our new match event concept to the Tampere ice hockey fans. The new arena provides an excellent venue for delivering unprecedented sports experiences. In both games of the opening weekend, the spectators will get an amazing opportunity to see and experience something totally new when both teams present their new match events for the first time, says Mika Aro, the CEO of Tamhockey.

Tampere will host the 2022 Men's Ice Hockey World Championships together with Helsinki. According to a release by the Hockey Association, Tampere will be the main venue for the games. Group B preliminary round, two quarter-finals, semi-finals, and finals will be played in Tampere. Teams playing in Tampere consist of Finland, the USA, Czech Republic, Sweden, Norway, Belarus, and Great Britain.

With the completion of the new arena, a totally new era will begin in Tampere, and being the host for the championships means a lot for the City of Tampere.

Mayor of Tampere, Lauri Lyly, tells how excited the city feels about hosting the competition and how big of an honor it is to organize the games in Tampere, the hockey capital of Finland.

- There is also symbolic value here, as Finland's first World Hockey Championships were played at the Tampere Ice Rink in Hakametsä in 1965. Now, as well as then, the games are played in a newly completed arena. The World Cup is also an excellent opportunity to introduce our brand-new tram to a larger audience, says Mayor Lyly.