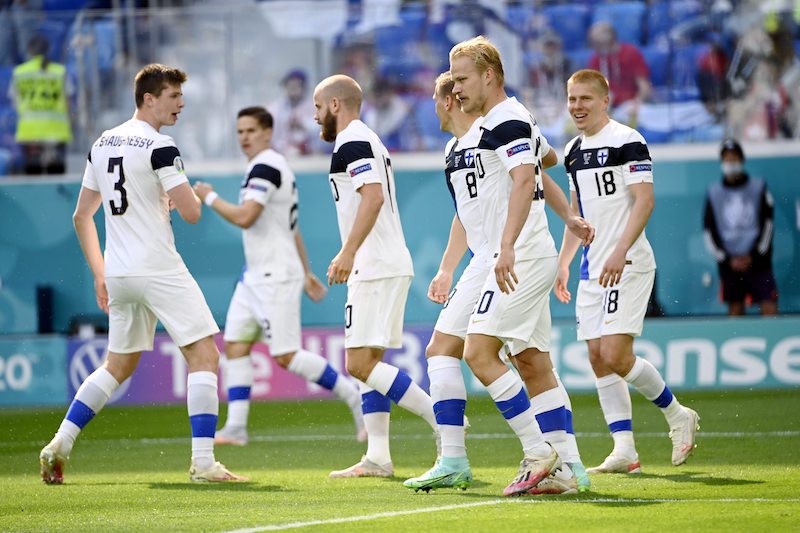 aniel O'Shaughnessy (L), Jukka Raitala, Teemu Pukki, Robin Lod, Joel Pohjanpalo and Jere Uronen of Finland celebrate a goal which was later disallowed due to offside during the UEFA EURO 2020 Group B football match between Finland and Russia at the Saint Petersburg Stadium in Saint Petersburg, Russia, on June 16, 2021.

Cheers, happy screams, and jubilations often characterize a football game. And while many countries have united in victory, the Huuhkajat have bitten their nails and shed tears of sorrow more times than they can count. This team has never reached the FIFA world cup and has never ranked high. In 2017, the national team had its lowest rating yet, sitting at a disgraceful 110th position.

However, things are starting to change. As it stands, the country sits at a more respectable position—58th position. They also booked a place in the Euro 2020 Championship, their first international tournament. While many didn’t expect the team to qualify, they not only did but went on to put up a good performance, securing three points from three games and ending as third in the group. It was an excellent outing by all standards.

With the Eagle Owls’ latest impressive performance, many fans were willing to place a bet on them, taking advantage of the many no account sites starting to pop up all over the place. Wondering why many are willing to stake their earnings on the country? Sometimes, it's not about the sad history but rather a hopeful future.

According to the Helsinki Times, the Huuhkajat had a great start to football. Despite poor funding, the team went on to put up an incredible performance in the 1912 Olympics, defeating Russia and Italy and almost clinching the bronze medal in that competition.

However, things went south after that, with the Civil War of 1918 causing the disintegration and division of the team.

Rise from the ashes

For decades, the Finnish national team was marked with stagnation with only a few victories to show for all their efforts. Some of their notable highlights were the Nordic Championship victory of 1964 and 1966, with the most disappointing being their failure to qualify for the 1998 World Cup qualifiers despite leading Hungary by 1 goal to nil till the last minutes.

However, all that is in the past now. The team’s qualification for the Euros was no mere fluke but rather as a result the complete overhaul that was taken to make the team better.

With a manager such as Markku Kanerva, the players are more open to taking risks and chances and we saw that play out in all their games against Denmark, Russia, and Belgium. Also, the inclusion of top striker Teemu Pukki added an extra boost of confidence to the squad.

From their performance in the Euros, it is clear that Finland is here to stay. They may not have won the battle, but they will win the war someday.