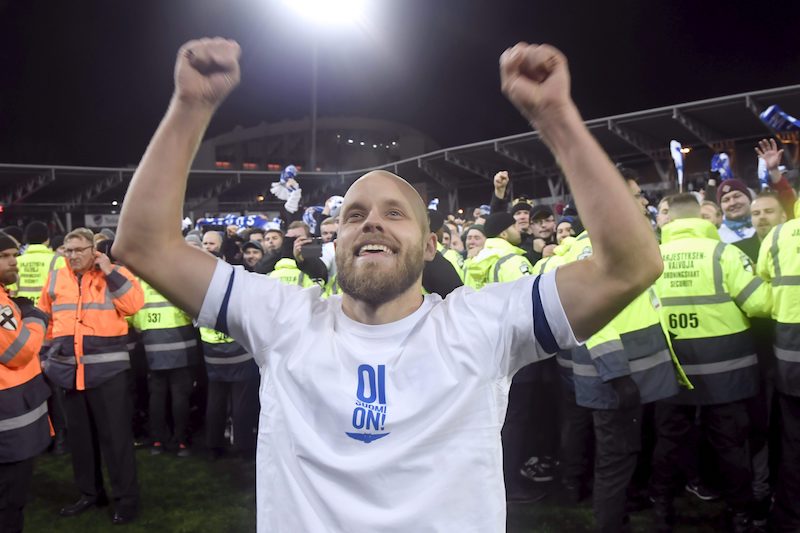 Teemu Pukki of Finland celebrates in front of fans after the Euro 2020 Group J qualification football match between Finland and Liechtenstein in Helsinki, Finland, on November 15, 2019.

FINLAND’S NATIONAL FOOTBALL TEAM, KNOWN AS THE HUUHKAJAT (‘eagle-owls’) has long been considered more of a running joke than a source of national pride. However, with their recent shock win in the Euro qualifiers back in November, the world is finally starting to pay attention as the once-beleaguered team prepares to represent Finland on the world stage this summer.

The Eagle-owls have historically been known in Finland and beyond as under-achievers, having notably shared the unfortunate distinction of being the only Nordic team (apart from the Faroe Islands) to have never reached the FIFA World Cup Finals. As recently as 2017, the team hit their all-time-low in the FIFA rankings, sitting at a dismal 110th place.

However, things have turned around dramatically over the past couple of years. Finland now sits at a more respectable 58th place, their place at the 2020 European Championship is secure, and pundits around the world are optimistically discussing the future prospects of the Finnish squad. Many fans who have betted on the team’s success on sites such as Finnish information portal HEX were happily surprised. With Finland finally set to have their moment in the sun this summer, let’s take a look at the story of the Huuhkajat so far, and see if we can determine what the future holds.

The origins of the Finnish national team are more colourful than those of its Nordic counterparts. Finland’s football association was founded in 1907 and joined FIFA a year later, at a time when the country was still a part of the Russian Empire. Despite a lack of resources and funding, the national squad performed well during its early forays on the international stage, beating off Italy and Russia in the 1912 Summer Olympics and almost securing a bronze medal before being defeated by The Netherlands.

This initial promise was short-lived. As with virtually every other aspect of Finnish society, the 1918 Civil War fragmented the national team, as opposing political sides fought to claim the team as their own national symbol. As a result, the team split into two, with one team being backed by the right-wing Finnish Gymnastics and Sports Federation and the other being backed by the leftist Finnish Workers’ Sports Federation. Only the former was recognised by the Football Association, leaving the latter to play in “international labour movement” tournaments backed largely by the Soviet Union.

It took until 1939 for players from the left-wing association to be accepted onto the “official” national team, while the two sides would not be merged into one until 1956.

Much of the following decades were marked by stagnation and disappointment. Despite a few occasional highlights, such as Finland’s victory in the unofficial Nordic Championships in 1964 and 1966, the national team repeatedly failed to get their foot in the door.

The squad failed to qualify for both the 1980 Euro Championships and the 1986 World Cup by just a single point. Despite being expressly invited by the Soviet Union to participate in the 1980 Summer Olympics in Moscow (in part due to a mass boycott of the games by Western countries), they again failed to make the cut.

One of the team’s most notorious moments came during the 1998 World Cup qualifiers. Despite being up 1-0 against Hungary in the final qualifying match, the team scored an own goal going into injury time, deferring their hopes for qualification yet again. Similar stories would play out over the next two decades.

While some seasoned fans may be wary of getting their hopes up, there are some genuine signs that Finland may be at a turning point in its footballing history. Their qualification for the Euros in November was no simple fluke. Rather, it was the result of a management approach that has eschewed tactics from the past, such as stacking the team with star players, in favour of a more meticulous approach.

Finland manager Markku Kanerva, who took the reins in 2016, has been described as a “theoretical, calming presence” who encourages players to take greater risks on the pitch. The addition of Teemu Pukki, the striker who has made a name for himself in the UK due to his stellar performances for Norwich City, has also proven to be a major boost for the squad.

It’s clear that, as Finland heads to the Euros, the team and the fans are feeling more confident than they have in years. The world will be watching to see if they can finally turn the tide this summer.