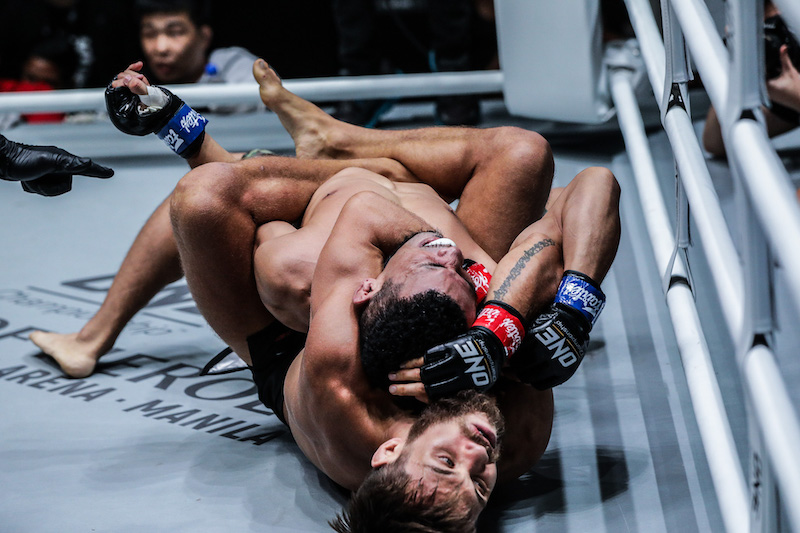 It was a cozy minus 30 degrees when Aleksi Toivonen left the comforts of home in Finland. When he arrived in Singapore it was plus 30 degrees, and sweltering, and his whole world had changed.

“My head was spinning,” says Toivonen. “I thought I was going to have heat stroke and I didn’t really know what was going on.”

He certainly does now. On Friday night the 27-year-old flyweight from Lahti made a winning debut with the Singapore-based ONE Championship martial arts promotion having secured a contract that Toivonen says came right out of the blue.

A friend had last summer alerted him to a Facebook posting calling for international fighters to come for try outs at Singapore’s Evolve MMA gym.

“Honestly I sent my CV in and I forgot about it,” said Toivonen, who carries the cage name “The Giant” with him into battle.

“I was focusing on my next fight then an email came, then I spent my last of my money on a flight to Singapore. One week later I had a contract. By early February I was living in Singapore.”

Mixed martial arts continues to grow in popularity around the world and fighters such as Toivonen are finding opportunities to further their careers everywhere.

As Asia’s largest martial arts promotion, ONE has increasingly looked outside the region as it expands its roster, signing the likes of America’s former UFC champions Demetrious “Mighty Mouse” Johnson and Eddie “The Underground King” Alvarez, living legends in MMA circles.

But never before have they had a Finnish fighter on their books, and Toivonen’s super impressive first-round submission win on Friday night should see them coming back for more.

Toivonen had arrived in Kuala Lumpur from Singapore for Friday night’s ONE: Masters of Destinycard looking fit and fresh after six months adapting to his new home, and to his new life. With finances taken care of, Toivonen is able to focus on training full-time safe in the knowledge that, with ONE hosting around 40 events yearly, his immediate future in the fight game is secured.

It’s a long way from home and a long way from the regional Finnish MMA circuit, and the likes of Fight Night Finland and CAGE MMA Finland, still struggling to compete with the country’s traditional sporting fixations.

“It’s hard to get recognition. We’re a small country, there are a lot of sports,” said Toivonen

Toivonen’s martial arts journey began as an overactive six-year-old, whose parents were trying to find an avenue down which to channel their son’s energies. Today, Toivonen reveals he felt almost immediately that he had found his life’s passion.

“My parents wanted to find a way for me to express myself. I found it in martial arts,” said Toivonen, a two time Finnish national amateur MMA champion.

“It started with [the Japanese martial art] taido, which is good for kids. Then I fell in love with Brazilian jiu-jitsu. It’s been my life ever since. I built more than half my whole life around it. I am a passionate person. When I set myself goal, I don’t give up.”

While Toivonen now focuses on MMA, he carries with him a BJJ brown belt, and has three IBJJF No-Gi European Championship titles to his name.

“Being a full-time fighter now has really made a difference,” he says. “The focus is only on training and resting and that is a big difference. There are no distractions, no having to work nine to five. That mental strain is gone and I am seeing the improvements.”

The first test Toivonen faced in Asia came on Friday in the shape of the 39-year-old Japanese fighter Akihiro “Superjap” Fujisawa (5-2-1), a fighter known for a penchant for trying to finish his fights early rather than let them go to the judges’ scorecards. But Toivonen was the aggressor from the first bell, and once the fight went to the mat, he moved in behind his opponent, and he brought matters to an early end with at around 3.30 of the first round.

“I’m feeling great,” said Toivonen. “There’s no added pressure and I am just enjoying the ride. Everything is exactly as it’s meant to be. I’ve been doing this my whole life so I know what I am capable of. It’s all about performance. Go, give your best, perform.”

ONE Championship events are available live – and free – via the super app found here.