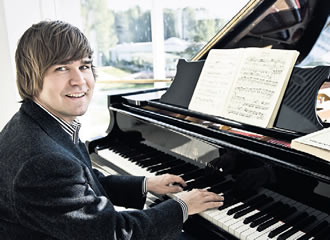 Finnish researchers have identified variants in the human genome that affect a person's musicality.

The genes are located in genomic regions that are involved in the development of the inner ear, recognition of emotions and memory.

The researchers identified altogether nine stretches of DNA on the human genome that are linked to musicality.

The study comprised 767 participants from 76 Finnish families originating from different parts of the country.

Participants' musical talent was investigated by evaluating their ability to recognise the pitch and duration of a sound and other structures of music. Genetic studies in the families revealed nine regions that were associated with high score in these tests measuring musical aptitude.

"The families participating in the study were collected over a number of years. The first families were recruited through Sibelius Academy, so the first person in the family to join the study was usually a musician," explains Jaana Oikkonen, a researcher at Helsinki University.

"Later on, we recruited families in public events organised, for example, in the science museum Heureka. In these families, there were only a few musicians."

"The families were not selected on the basis of musicality but neither was it a randomly chosen sample," says Olkkonen.

As the families who joined the study at the later stage did so without a personal invitation, it is likely that they have a relatively keen interest in music.

The study found the strongest association with musical talent for chromosome 3, which harbours a gene called GATA2. This gene regulates the development of cochlear hair cells in the inner ear and the inferior colliculus, a region of the brain connected with the reception of auditory signals.

A cluster of five

The study revealed another region affecting musicality on chromosome 4, which contains a cluster of five genes that are involved in the development of the inner ear and the functioning of the brain. They have an effect on the amyglada, a region of the brain, which plays a role in memory and emotions evoked by music.

People recognise sounds with the hair cells of the cochlea in the inner ear, which convert sound waves to electric signals. From the inner ear, auditory signals travel to the primary auditory cortex.

The research revealed seven different genes that are involved in the development and functioning of the inner ear, the amyglada and the hippocampus, the brain's memory centre, confirming that there are congenital and inherited factors behind musicality.

But to become properly expressed, musical talent also requires exposure to music and that is where music culture has an important role to play.

Funded by the Academy of Finland, the Finnish study was published in the journal Molecular Psychiatry.