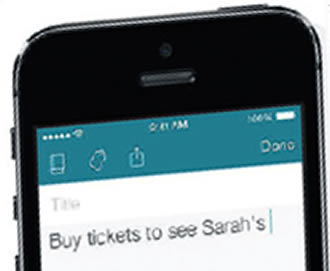 Failures in predictive text algorithms may be great fodder for humor websites, but those goofy typos can be maddening. SwiftKey has been one of the most popular keyboard apps for Android, as an app that lets you swipe to type. Apple, however, does not allow developers to modify its keyboard. So SwiftKey is looking to improve typing on iDevices in another way — by applying its algorithms to improve Apple's AutoCorrect.

Rather than integrating into the keyboard, SwiftKey's app is a note-taking app, which offers users three options for each word they type to increase speed. It also learns your habits as you use it, so it saves you time in the long run. The app hooks into Evernote, so you can type excellent constructed notes for yourself. You can also share the notes over email or text. Doing so adds an extra step to the process, which understandably may turn off some users. But while using SwiftKey for your iOS typing may lose you some time, it may help you save face. Free, for iOS.

One of Google's lower-profile apps, this has a lot of value for those who do a lot of work on mobile devices. The app differs from Google's other major office productivity app, Google Drive, in some small but key ways. QuickOffice's main appeal is that it works with Microsoft Office file formats, even if they're not stored on Google Drive. So if you get an email with a Microsoft Office file you want to edit, you can open it in QuickOffice right from the attachment. Using Google Drive, you can only read Office documents, even if they're stored in your Google Drive.

QuickOffice also offers you a little more flexibility in general — it's a stronger editor than Google Docs and has an easy interface that makes it simple to use. It's not going to replace your computer for composing long documents, but it is a great tool for when you're on the road. There are some, however, who will be disappointed with QuickOffice — namely those who used the product before Google acquired it. Since the acquisition, the app has lost some features, namely integration with services such as Dropbox. Free, for iOS and Android.