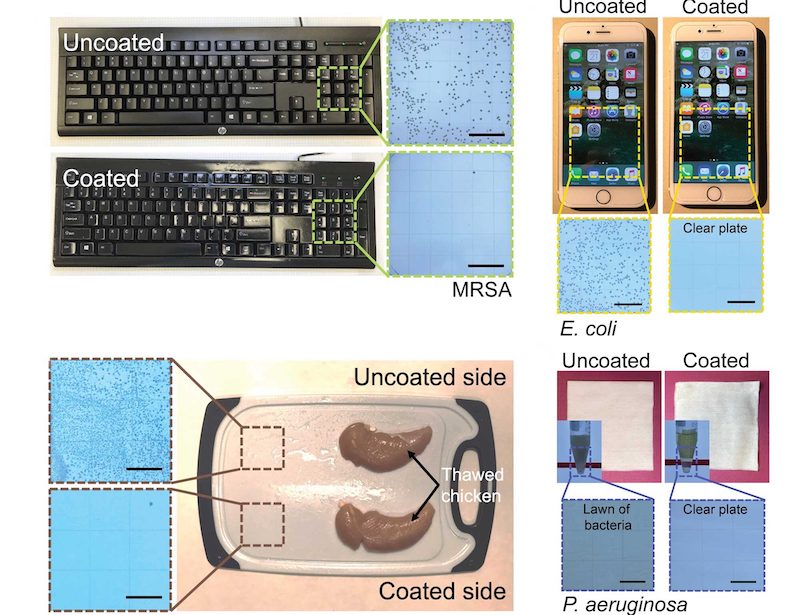 These images show the bacterial load on a coated and uncoated computer keyboard, cell phone and cutting board with raw chicken. Image credit: Anish Tuteja

In our centuries-old struggle against germs, we may soon have a new weapon: the first long-lasting coating that can kill bacteria and viruses in minutes and continue to kill them for months at a time.

Developed by a team of University of Michigan engineers and immunologists, it proved deadly to SARS-CoV-2 (the virus that causes COVID-19), E. coli, MRSA and a variety of other pathogens.

It killed 99.9% of microbes even after months of repeated cleaning, abrasion and other punishment on real-world surfaces like keyboards, cell phone screens and chicken-slathered cutting boards.

The coating could be a game changer in traditionally germ-laden public spaces like airports and hospitals, according to Anish Tuteja, a professor of material science and engineering at U-M and co-corresponding author of the paper published in Matter.

"We've never had a good way to keep constantly-touched surfaces like airport touch screens clean," he said. "Disinfectant cleaners can kill germs in only a minute or two but they dissipate quickly and leave surfaces vulnerable to reinfection. We do have long-lasting antibacterial surfaces based on metals like copper and zinc, but they take hours to kill bacteria. This coating offers the best of both worlds."

The coating, which is clear and can be brushed or sprayed on, gets its durability and germ-killing power by combining tried-and-true ingredients in a new way. It uses antimicrobial molecules derived from tea tree oil and cinnamon oil, both used for centuries as safe and effective germ killers that work in under two minutes. The coating's durability comes from polyurethane, a tough, varnish-like sealer that's commonly used on surfaces like floors and furniture.

"The antimicrobials we tested are classified as 'generally regarded as safe' by the FDA, and some have even been approved as food additives," Tuteja said. "Polyurethane is a safe and very commonly used coating. But we did do toxicity testing just to be sure, and we found that our particular combination of ingredients is even safer than many of today's antimicrobials."

The results of the study's durability tests suggest that the coating could keep killing germs for six months or longer before its oil begins to evaporate and reduce its disinfectant power. But even then, Tuteja says it can be recharged by wiping it with fresh oil; the new oil is reabsorbed by the surface, starting the cycle again.

Tuteja estimates that the technology could be commercially available within a year; it has been licensed to Hygratek, a spinoff company that Tuteja founded with assistance from U-M Innovation Partnerships.

The key challenge was to combine the oil and polyurethane in a way that let the oil molecules do their germ-killing work while preventing them from evaporating quickly. The research team -- including associate professor of materials science and engineering and biomedical engineering Geeta Mehta, a co-corresponding author; and materials science and engineering PhD students Abhishek Dhyani and Taylor Repetto, co-first authors -- found a possible solution in cross-linking, a well-known process that uses heating to link materials together at the molecular level. The smaller oil molecules readily combined with the cross-linking polymer molecules, forming a stable matrix.

But to kill germs, the oil molecules need to penetrate their cell walls, which they can't do if they're tightly tethered into the matrix. Eventually, they found a middle ground by partially cross-linking the materials -- enough to keep some of the oil molecules free to do their work, but keeping others bound tightly to the polyurethane.

"There was some trial and error, but we eventually found that cross-linking only some of the oil did what we needed," Tuteja said. "The free oil tends to stay with the oil that's cross-linked into the matrix, helping the coating last longer."

Once the basic recipe was set, the researchers set about finding a combination of active ingredients that would kill a wide variety of the germs that trouble humans most. To identify a representative sample of microbes, they worked with co-corresponding authors Christiane E. Wobus, an associate professor of microbiology and immunology, and J. Scott VanEpps, an associate professor of emergency medicine, both at the U-M Medical School. Ultimately, they found a precise balance of antimicrobial molecules that were effective, safe and inexpensive.

Tuteja emphasizes that they're not locked into one specific formula; the team's understanding of individual ingredients' properties enables them to tweak the formula for specific applications or rebalance the antimicrobial agents to kill specific germs.

"It's never our goal just to develop a one-off coating, but instead to develop a library of underlying material properties to draw from," Tuteja said. "If we can understand those properties, then we can develop coatings to meet the needs of specific applications."