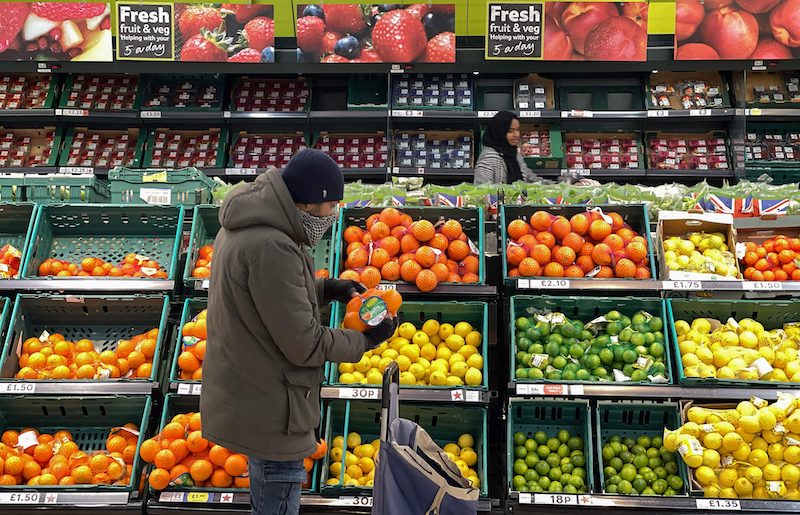 A customer shops for food items inside a Tesco supermarket store in east London. LEHTIKUVA / AFP

Minor genetic differences can affect the ability to utilize the energy of various nutrients, according to a new study by the University of Helsinki.

The findings of the study were published in the journal 'Nature Communications.'

The study showed how nutritional planning based on genetic data could promote the development of personalized nutrition for health.

In an international collaborative study, researchers from Australia, Denmark, and Finland investigated how individuals of the same population differ in their ability to survive on various diets.

The study of fruit flies found that small genetic differences affected the flies' ability to use the energy of various nutrients.

"Unexpectedly we found that the fruit fly strains differed considerably, for example, in their ability to survive on a high-sugar diet. What makes this particularly surprising is the fact that the food consumed by fruit flies in nature contains a lot of sugars," said Essi Havula, now a postdoctoral researcher at the University of Helsinki and the lead author of the study.

"The genes that regulate metabolism have been conserved well in evolution, which is why we can learn a lot about human metabolism through studies carried out with fruit flies," Havula added.

In genetic analyses, the researchers identified a number of genes that contributed to the ability of flies to tolerate sugar. Most of these genes are found also in humans and have been suggested in previous genome-wide association studies to play a role in obesity and type 2 diabetes.

"Fly studies enable fast and cost-effective functional studies to investigate the genes in depth. Among other things, we demonstrated that the tailless gene (TLX), previously investigated primarily from the perspective of the function and development of the nervous system, is necessary for the normal function of sugar metabolism in flies," Havula said.

In addition, the researchers demonstrated that the JNK pathway, one of the most important stress-signalling pathways, regulated sugar metabolism and storage-fat synthesis in the case of high-sugar diets in the study.

"It appears that dietary sugar causes stress to the cells, giving the JNK pathway an important role in how effectively flies tolerate and process sugar," Havula said.

According to the researchers, most of the findings can be applied to humans as well, even though further research is still needed. Havula pointed out that the study provides concrete evidence on how the same dietary recommendations do not necessarily suit everyone.

"Research-based knowledge increasingly shows how metabolic responses to diets differ between animal populations and individuals. Traditional dietary recommendations are not necessarily suited to everyone, which explains the continued lack of consensus on a 'healthy diet'."

One option is to develop nutrition in a more personalized direction with the help of nutrigenomics.

"Hopefully, in the future type, 2 diabetes and many other metabolic diseases can be treated with nutritional planning based on knowledge of individual genomes. This would be considerably less expensive than drug therapies as well as better for the health of individuals in the long run," Havula said.

The potential of nutrigenomics is not limited to the treatment of traditional metabolic diseases.

"For example, cancer cells are known to alter their metabolism, extending the potential of nutrigenomics to a wide range of fields," Havula added.