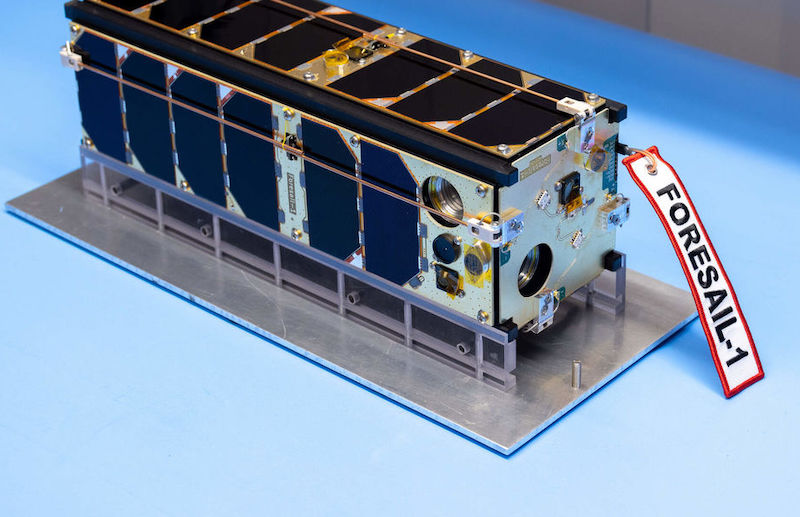 Though the satellite is just the size of a milk carton, it will carry two unique scientific instruments developed by the Centre of Excellence. Photo: Mikko Raskinen / Aalto University

Foresail-1, the first satellite from the Finnish Centre of Excellence in Research of Sustainable Space, is ready for space. ‘With the help of long-term funding from the Academy of Finland, we have created the first scientific space programme in Finland, which aims to develop more sustainable space technology,’ says Professor Minna Palmroth from the University of Helsinki, the director of the Centre of Excellence.

The satellite's journey from Otaniemi in Espoo will begin within a few days. The first stop will be Berlin, Germany, where the satellite will be integrated into the launch adapter. Foresail-1 will be delivered to its designated rocket by the German launch service provider EXOLaunch. In the summer, the satellite will be launched on a SpaceX Falcon 9 rocket from the space centre in Cape Canaveral in Florida, USA.

The satellite systems and scientific instruments in Foresail-1 were all developed and built in Finland. The Centre of Excellence studies space conditions and uses this research to develop satellites that will last longer in the challenging conditions of space. It is headed by the University of Helsinki and includes Aalto University, the University of Turku and the Finnish Meteorological Institute. The teams from the Finnish Meteorological Institute and the University of Turku are responsible for the scientific instruments and their measurements.

The Aalto University team was in charge of planning the mission and building the satellite. The team developed a completely new, open satellite platform in its laboratory. The satellite platform and the subsystems, such as the positioning system, radio, central computer, frame, antennas, position sensors, batteries and solar panels, can be used in future Finnish satellite missions. The satellite plans will be made available as an open-source project.

According to Assistant Professor Jaan Praks from Aalto University, particular attention was paid to the reliability and longevity of the satellite by protecting its electronics from space radiation better than in previous small satellites.

‘Several development versions of the satellite were built throughout the project, and the functionality of the systems was ensured through dozens of tests in conditions like high vibration, vacuum and low temperatures. The final flight model of the satellite will soon be integrated into the launch adapter, which will then be attached to the Falcon 9 rocket at the launch site in Cape Canaveral,’ Praks says.

Control and operation of the satellite will be handled by the Otaniemi ground station, which currently tracks the Aalto-1 and Suomi100 satellites. The ground station operations are built on solutions and software developed at Aalto University.

Though the satellite is just the size of a milk carton, it will carry two unique scientific instruments developed by the Centre of Excellence: the PATE particle telescope, which will study the near-Earth radiation environment, and a plasma brake, which will bring the satellite out of orbit.

The plasma brake has already been tested in Aalto-1, but further development has improved its operational reliability. The brake aims to significantly reduce the amount of space debris in orbit by slowing the satellite down, so it falls back into the atmosphere, where it goes up in smoke. Normally it takes years for satellites to sink with return into the atmosphere, but with the plasma brake, the process could be sped up to just two months.

‘The plasma brake works in theory and in our tests, but its braking force has not yet been fully measured in space,’ says Research Manager Pekka Janhunen from the Finnish Meteorological Institute.

The goal of the PATE particle telescope, developed at the University of Turku, is to help researchers better understand the radiation environment of space and thus extend the life of satellites there.

‘More accurate measurements from the PATE instrument will help us determine how electrons exit the radiation zones into the atmosphere. With this knowledge, we’ll be able to develop satellites that can withstand space radiation better and operate in space for longer,’ says Professor Rami Vainio from the University of Turku.