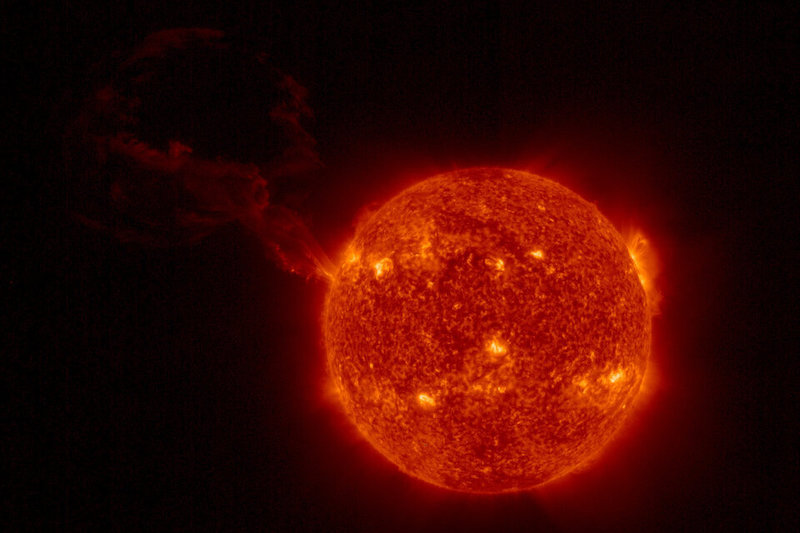 The Solar Orbiter spacecraft, a joint project of the American National Aeronautics and Space Administration (NASA) and the European Space Agency (ESA) has captured the largest solar prominence eruption ever observed in a single image together with the full solar disc.

This latest event took place on 15 February and extended millions of kilometres into space. The eruption most likely originated from the side of the sun facing away from earth. Hence,  the coronal mass ejection was directed away from Earth.

"The prominence observed by Solar Orbiter is the largest ever event of its kind to be captured in a single field of view together with the solar disk, opening up new possibilities to see how events like these connect to the solar disk for the first time. At the same time, SOHO can provide complementary views to even larger distances," the ESA said in a statement.

The imagery was captured by the 'Full Sun Imager' (FSI) of the Extreme Ultraviolet Imager (EUI) on Solar Orbiter. FSI is designed to look at the full solar disc even during close passages of the Sun.

Solar prominences are large structures of tangled magnetic field lines that keep dense concentrations of solar plasma suspended above the Sun's surface, sometimes taking the form of arching loops. They are often associated with coronal mass ejections, which can wreak havoc with our technology and everyday lives if directed towards the earth.

Other space telescopes such as the ESA/NASA's Solar and Heliospheric Observatory (SOHO) satellite frequently see solar activity like this, but either closer to the Sun, or further out by means of an occulter, which blocks out the glare of the Sun's disc to enable detailed imagery of the corona itself. Thus, the prominence observed by Solar Orbiter is the largest ever event of its kind to be captured in a single field of view together with the solar disc.