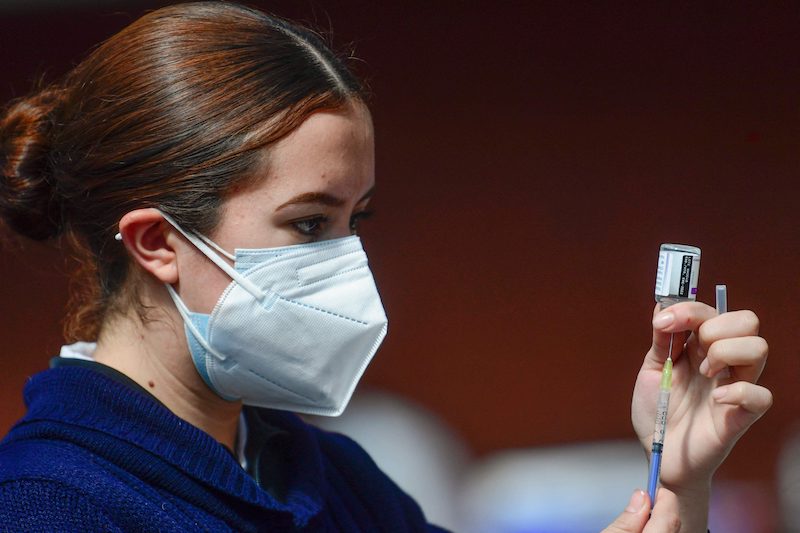 A nurse prepares a dose of the AstraZeneca vaccine against COVID-19 at a vaccination center at the Sport City, in Mexico City, on January 18, 2022. LEHTIKUVA / AFP

A new research has found that COVID-19 vaccination offers long-lasting protection from the worst outcomes of COVID-19.

The research has been published in the 'New England Journal of Medicine'.

The emergence of the delta and omicron variants had raised questions about whether breakthrough infections are caused by waning immunity or by the more transmissible variants.

Results of the study suggested that declining immunity is responsible for breakthrough infections, but vaccines maintained protection from hospitalization and severe disease nine months after getting the first shot.

"The primary takeaway message from our study is that unvaccinated people should get vaccinated right away," said lead study author Danyu Lin, PhD, Dennis Gillings Distinguished Professor of Biostatistics at the UNC Gillings School of Global Public Health.

"The results of our study also underscore the importance of booster shots, especially for older adults," Lin added.

The study, which is a collaboration between the UNC-Chapel Hill and the North Carolina Department of Health and Human Services, examined data on COVID-19 vaccination history and health outcomes for 10.6 million North Carolina residents between December 2020 and September 2021.

The study results were used by the Centres for Disease Control and Prevention to support the use of booster shots.

"This is an excellent example of the wonderful research partnership between the Gillings School and NCDHHS, who are working together to generate the evidence base needed to keep our communities safe," said Penny Gordon-Larsen, PhD, Carla Smith Chamblee Distinguished Professor of Global Nutrition and associate dean for research at UNC Gillings School of Global Public Health

This data included outcomes from COVID-19 cases caused by the delta variant. However, data from this study were collected before the discovery of the omicron variant.

"By applying a novel methodology to the rich surveillance data, we were able to provide a precise and comprehensive characterization of the effectiveness over a nine-month period for the three vaccines employed in the U.S.," Lin said.

"Unlike previous studies, we estimated the vaccine effectiveness in reducing the current risks of COVID-19, hospitalization, and death as a function of time elapsed since the first dose," Lin continued.

"This information is critically important in determining the need for and the optimal timing of booster vaccination," Lin added.

Among early recipients of the two mRNA vaccines, effectiveness dropped dramatically from mid-June to mid-July, when the delta variant was surging.

Effectiveness for the Johnson & Johnson adenovirus vaccine was 75 per cent at one month after injection and fell to 60 per cent after five months.

For all three vaccines, effectiveness against death was higher than that of hospitalization.

"Because the majority of the vaccines in the U.S. were administered more than seven months ago and only a small percentage of the population has received boosters, waning immunity is likely contributing to the breakthrough infections with the omicron variant," Lin said.

Everyone age 5 and older are eligible for a COVID-19 vaccine. Those ages 18 and up should get a booster shot.