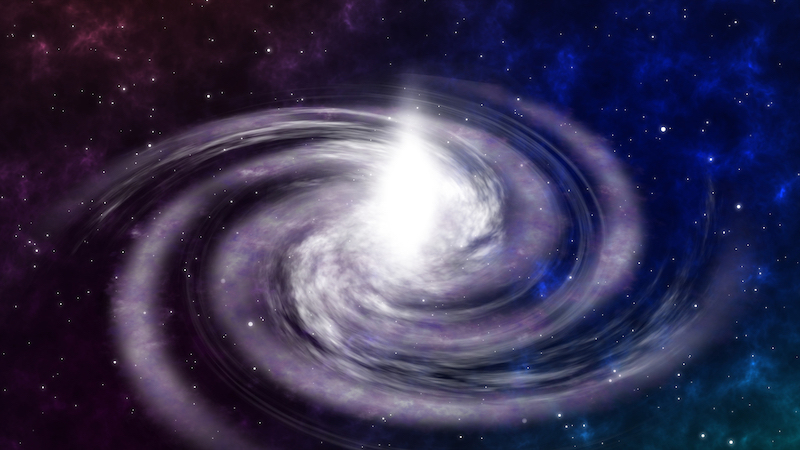 NASA on Tuesday announced scientists have spotted a previously unrecognized feature of our Milky Way galaxy: A contingent of young stars and star-forming gas clouds is sticking out of one of the Milky Way's spiral arms like a splinter poking out from a plank of wood.

Stretching some 3,000 light-years, this is the first major structure identified with an orientation so dramatically different than the arm's. NASA said that astronomers have a rough idea of the size and shape of the Milky Way's arms, but much remains unknown.

"They can't see the full structure of our home galaxy because Earth is inside it. It's akin to standing in the middle of Times Square and trying to draw a map of the island of Manhattan. Could you measure distances precisely enough to know if two buildings were on the same block or a few streets apart? And how could you hope to see all the way to the tip of the island with so many things in your way?" NASA questioned.

To learn more, the authors of the new study focused on a nearby portion of one of the galaxy's arms, called the Sagittarius Arm, NASA said. Using NASA's Spitzer Space Telescope prior to its retirement in January 2020, they sought out newborn stars, nestled in the gas and dust clouds (called nebulae) where they form. Spitzer detects infrared light that can penetrate those clouds, while visible light (the kind human eyes can see) is blocked.

Young stars and nebulae are thought to align closely with the shape of the arms they reside in. To get a 3D view of the arm segment, the scientists used the latest data release from the ESA (European Space Agency) Gaia mission to measure the precise distances to the stars. The combined data revealed that the long, thin structure associated with the Sagittarius Arm is made of young stars moving at nearly the same velocity and in the same direction through space.

"A key property of spiral arms is how tightly they wind around a galaxy," said Michael Kuhn, an astrophysicist at Caltech and lead author of the new paper. This characteristic is measured by the arm's pitch angle. A circle has a pitch angle of 0 degrees, and as the spiral becomes more open, the pitch angle increases. "Most models of the Milky Way suggest that the Sagittarius Arm forms a spiral that has a pitch angle of about 12 degrees, but the structure we examined really stands out at an angle of nearly 60 degrees."

Similar structures - sometimes called spurs or feathers - are commonly found jutting off the arms of other spiral galaxies. For decades scientists have wondered whether our Milky Way's spiral arms are also dotted with these structures or if they are relatively smooth.

The newly discovered feature contains four nebulae known for their breathtaking beauty: the Eagle Nebula (which contains the Pillars of Creation), the Omega Nebula, the Trifid Nebula, and the Lagoon Nebula. In the 1950s, a team of astronomers made rough distance measurements to some of the stars in these nebulae and were able to infer the existence of the Sagittarius Arm. Their work provided some of the first evidence of our galaxy's spiral structure.

"Distances are among the most difficult things to measure in astronomy," said co-author Alberto Krone-Martins, an astrophysicist and lecturer in informatics at the University of California, Irvine and a member of the Gaia Data Processing and Analysis Consortium (DPAC). "It is only the recent, direct distance measurements from Gaia that make the geometry of this new structure so apparent."

In the new study, researchers also relied on a catalog of more than a hundred thousand newborn stars discovered by Spitzer in a survey of the galaxy called the Galactic Legacy Infrared Mid-Plane Survey Extraordinaire (GLIMPSE).

"When we put the Gaia and Spitzer data together and finally see this detailed, three-dimensional map, we can see that there's quite a bit of complexity in this region that just hasn't been apparent before," said Kuhn.

"Astronomers don't yet fully understand what causes spiral arms to form in galaxies like ours. Even though we can't see the Milky Way's full structure, the ability to measure the motion of individual stars is useful for understanding this phenomenon: The stars in the newly discovered structure likely formed around the same time, in the same general area, and were uniquely influenced by the forces acting within the galaxy, including gravity and shear due to the galaxy's rotation," NASA said.

"Ultimately, this is a reminder that there are many uncertainties about the large-scale structure of the Milky Way, and we need to look at the details if we want to understand that bigger picture," said one the paper's co-authors, Robert Benjamin, an astrophysicist at the University of Wisconsin-Whitewater and a principal investigator on the GLIMPSE survey. "This structure is a small piece of the Milky Way, but it could tell us something significant about the Galaxy as a whole."