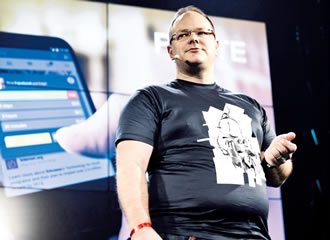 By all accounts, 2014 was a pretty ace year for genius Mark Zuckerberg and his ongoing takeover of the world.

Facebook celebrated its 10th anniversary in February and its 1.35 billionth user just nine months after that. (Stop here for a minute, because that number is worth considering: 1.35 billion. Billion. OK, continue.)

Facebook acquired Oculus, makers of a much-touted virtual reality headset, and WhatsApp, the massively popular messaging app. The company launched a steady stream of its own apps, too: Paper, Slingshot, Mentions, Messenger, Rooms. In late July, Facebook released a mobile app to provide free basic Internet service in regions of the world lacking what so many of us take for granted; that's since rolled out in Zambia, Kenya and Tanzania. And as if we needed further proof that the social network is a global powerhouse, the World Cup broke all-time records for the site: 350 million people posted about the games a total of 3 billion times.

And yet, even as Facebook strides boldly toward world domination, cracks have appeared in its once fresh-faced facade. Teens – the best indicator for Web zeitgeist – have fled the network for younger, hipper venues. In the past year, users have begun complaining about the insidious reach of algorithms, as well as the site's every incremental change. A wave of anonymous apps has begun to erode the distinctly Facebookian notion that everything you do online should be tied to your real-life name.

Perhaps most damningly, for the first time since Facebook launched in 2004, someone made a go at an overtly, intentionally anti-Facebook network. Sure, Ello sputtered out in a span of months – but it gave voice to the concerns of a million wary Facebook users, first.

In the words of one industry analyst: "You look at Facebook and you say, 'Wow, something really changed in 2014.'"

Much of this is, of course, nothing more than predictable backlash to Facebook's gargantuan growth. Only six or seven years ago, pundits were still dismissing it as the fringe sandbox of college students; now the company – valued at more than 200 billion US dollars – is as much a household name as Coca-Cola or Ford.

But the sheer number of controversies and culture wars that Facebook's gotten tangled in over the past year would seem to suggest something more than run-of-the-mill contrariness in the face of change.

Users practically rioted over an A/B testing experiment that, they feared, "manipulated" their emotions and gave Facebook psychological powers it seemed destined to abuse. Soon after, they objected to Facebook's forced rollout of a stand-alone messaging app – "creepy" and "invasive," critics ruled – and a series of changes to the News Feed that, while arguably valuable, also increased the visibility of Facebook's mysterious algorithmic filtering.

In May, Facebook rolled out an unabashedly nosy feature called "Ask," which – practically speaking – encourages users to publish more personal details than they might otherwise. A few months later, the site found itself clashing with drag performers, LGBT advocates and others over another type of personal detail: Facebook has long insisted that users operate under their "real," or legal, names regardless of the context.

From a business perspective, that policy makes sense: Your identity, with all the demographics and browsing data attached to it, is exactly what Facebook sells advertisers. But from any kind of personal POV, that seems pretty crazy: It's essentially Facebook – a largely automated, algorithmic, non-human entity – telling you who to be.

"You are the product that's bought and sold," intoned the widely shared manifesto of the social networking start-up Ello, which briefly billed itself as an ad-free alternative to Facebook. "We believe there is a better way."

Ello is not the first or the only social network to challenge Facebook, of course – though it was the first to do so explicitly. A series of newly trendy anonymous apps, from Whisper and Secret to Yik Yak and newcomer After School, have all questioned the identity ethos at the heart of Facebook. On Whisper or Yik Yak, you do not have to be friends with your college professor or your cousin's neighbour or your office cubemate; you do not have to share your relationship status or your current location; you can be anyone or no one, and either is OK, and no one (or no thing) will tell you otherwise.

To members of Facebook's LGBT exodus, that premise was enticing. (In the wake of the real-name spat with Facebook, users signed-up for Ello at a rate of 4,000 per hour.) But even to casual users, the promise of an empowering, validating social network – one that put users' humanity before its own corporate concerns – was like straight-up manna. Tech writers were all too eager to anoint Ello the "Facebook-killer," or predict it would "steal Facebook's lunch."

"Facebook may be the biggest... social network around," Jeremy Quittner wrote over at Inc. "But that doesn't mean the competition isn't giving it hot flashes." (We interpret the odd reference to menopause as a commentary on the fact that Facebook's audience increasingly skews toward the middle aged.)

Ello has, of course, cycled out of the tech hype cycle just as fast as it cycled in. Facebook made nice with the LGBT community, ushering some of Ello's earliest adopters back into the FB fold; the site faded from Google searches and social mentions; a quick browse through Ello's proffered model profiles shows that many have only posted once or twice in the past week. A Facebook killer, this is not.

But truth be told, maybe Facebook needs no killer: the site is doing quite enough damage to itself. Just last week, Facebook became embroiled in a new controversy after it pushed a celebratory "Year in Review" feature to all users' pages. For the writer and Web consultant Eric Meyer, Facebook surfaced a photo of his recently deceased 6-year-old. ("It's been a great year! Thanks for being a part of it," the package's tagline read, while partying clip art figures danced around Meyer's daughter's face.)

"Yes, my year looked like that. True enough. My year looked like the now-absent face of my little girl," Meyer wrote on his blog. "And I know, of course, that this is not a deliberate assault... Algorithms are essentially thoughtless. They model certain decision flows, but once you run them, no more thought occurs. To call a person 'thoughtless' is usually considered a slight, or an outright insult; and yet, we unleash so many literally thoughtless processes on our users, on our lives, on ourselves."

It's a criticism of Facebook, or at least an epiphany about Facebook, that many have apparently experienced this year: when human relationships and identities are moderated by algorithm, particularly for profit, bad things happen. Inevitably! There are simply more variables in life than a string of code could ever account for. There are too many shades and expressions of personal identity, too many internal irrationalities and inconsistencies, too many secrets and whispers and emotional baggage for an algorithm to encode. That shortfall can leave us feeling anxious. Or dehumanised. Betrayed by the site, even.

Of course, the hordes of people who left Facebook in 2014 didn't usually articulate their concerns that way. A study out shortly before Christmas, by the research firm Frank N. Magid Associates, found that 6 per cent of high-schoolers abandoned the site in the past year. A much larger survey, this one conducted by the Pew Research Center last year, found that 61 per cent of all Facebook users have taken long breaks from the network and when asked why they went on hiatus, users most frequently said they were busy or bored or considered Facebook a "waste" of their time.

Facebook, unsurprisingly, sees itself in a different light. Early this month, the social network published a typically flashy, feel-good "year in review" for itself; the resulting video recounts the "moments, places and people that moved us in 2014" – a pretty bold claim, when you think about it, since Facebook is basically equating the stuff you post on Facebook with the stuff that matters most to you.

After winding through a series of news events and celebrity deaths, the video ends on a screengrab of a Facebook status: "Feeling connected," it reads. Thumbs up.

Alas, there may be no better symbol for Facebook's long year of discontent.