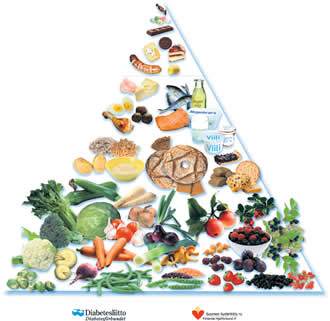 Up to now, the Mediterranean diet has been regarded as one of most the health-improving diets; it's rich in vegetables, legumes, fruits and nuts, cereals, fish and seafood, involves moderate alcohol consumption and low consumption of meat and meat products, explains Noora Kanerva. Kanerva defended her dissertation The healthy Nordic diet, obesity and obesity-related metabolic risk factors at the University of Helsinki's Public Health Department on 28 November. However, she claims, this might be hard to adopt by Nordic people, because the food culture and resources are different.

Therefore, Kanerva and her team started researching if a suitable alternative could be the Nordic Diet, based on the Baltic Sea Diet Pyramid that scientists designed in 2011 to outline the healthier choices of Nordic people. This diet consists of foods grown in the Nordic countries, such as apples and berries, roots and cabbages, rye, oats and barley, low-fat milk products, rapeseed oil and fish. It is also low in red meat, processed meat products and alcohol. Also vegetarians and vegans can abide by the Baltic Sea diet, as it includes peas for protein and milk products that can also be made of oat to replace cows' milk.

Kanerva's research was aimed at investigating whether the Baltic Sea diet could be promoted as a healthy weight diet. This was done by assessing the eating habits of 5,024 people. Their adherence to the Baltic Sea diet was studied, and it was then deduced if and how this is associated with general obesity: body mass index and abdominal obesity, which means excessive fat around the stomach and abdomen.

The study proved that people whose menu was similar to the Baltic Sea diet were less likely to be abdominally obese, although there wasn't any association between body mass index and the Baltic Sea diet, as these two features are independent. Kanerva explains that this diet might be useful for avoiding excessive abdominal fat, as it is high in fibres from rye, oats and barley and low in alcohol consumption.

Besides abdominal obesity, scientists who researched the group of almost 12,000 people have also found the diet to be beneficial for lowering inflammation, adds Kanerva. In other studies, where researchers have compared a group who follows the Baltic Sea diet to a group with their habitual diet, the Baltic Sea diet has been also beneficial to blood cholesterol level and weight. Swedish studies have related the Nordic diet to reduced cardiovascular risk factors and Danish researches have found an association between the consumption of Nordic foods and reduced mortality.

Kanerva, who follows the Baltic Sea diet herself, concludes that this study showed that it is possible to construct a healthy-weight diet with multiple good effects from local Nordic foods. The consumption of local foods has various benefits over using foreign foods, as growing them is cheaper and better for the environment. As these products are also well-known, it is easier for people to adapt them to their diet than foreign foods.

Although it might seem that Nordic people already adhere to this diet, Kanerva argues that there is still room for improvement when following it, especially among younger people. The study showed a stronger association between the Baltic Sea diet and abdominal obesity amongst the younger test participants, which indicates that they could benefit more from following that.

It is also important to point out that people need to change their menu significantly to ensure good outcomes, not only add a few healthy foods. Kanerva explained that if people rely on one healthy food, but the overall quality of the diet is low, all unhealthy foods in the diet might compensate for the positive effect of this healthy food.

Healthy weight management is relevant in Finland, as the rates of obesity have doubled from the years of 1980 to 2000, and the National FINRISK 2012 Study has showed that around 20 per cent of Finns are obese.

Kanerva is also continuing further with this study: her team has just collected follow-up data to confirm these results in a long-term perspective by seeing if people who adhere to the Baltic Sea diet actually lost weight or waist circumference over seven years.

Kanerva believes that as the consumption of foreign foods is already quite high here, people should be encouraged to buy local products by governmental regulation of their taxation and support of their production. "The use of Nordic foods could also be favoured in school meals, worksite canteens and other places where food is served publicly," adds Kanerva

The study has various applications. "This diet could be used in clinical practises and schools to promote healthier food habits and also to teach about our own food culture," explains Kanerva.

The Baltic Sea diet could be also adopted outside Nordic countries, but it is easier in places that are located at the same latitude and there will always remain some cultural differences that make it difficult for other nations to accommodate.

On a global perspective, Kanerva argues, it could be beneficial for Nordic countries to create a strong brand out of the Baltic Sea diet for attracting tourism with specialised restaurants and boosting the transport of superfoods, like rye bread or berries. According to her view, this action could be very efficient, because Finnish chefs have a good international reputation.

Greater consumption of Nordic foods could also be profitable for the Finnish economy, as people would spend their money on locally produced products. Apart from finance, encouraging consumption of, for example rapeseed oil, rye bread or low-fat milk products, Nordic countries would also promote public health. "After all, one of the key ideas was to show to the general public that we have a variety of great food products which we should be proud of," says Kanerva. "The Baltic Sea diet has the potential to be as successful as the Mediterranean diet."