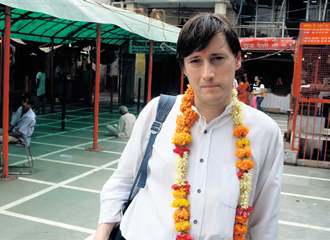 "I HAVE lived in Finland for nine years and I always wondered why they had so few Nobel prizes for science," explains Edward Dutton, an Adjunct Professor of the Anthropology of Finnish Culture at Oulu University. Wondering how Finns have a low per capita number of Nobel Prizes, although they have higher IQ and better PISA results than other European countries, he linked this with the genetic origins of the Finns and evolutionary theories of intelligence and personality and commenced the research.

This resulted in a recent paper that Dutton co-authored with psychologists Jan te Nijenhuis from the University of Amsterdam and Eka Roivainen from Verve Rehabilitation and Research Centre in Oulu. The paper, Solving the puzzle of why Finns have the highest IQ, but one of the lowest number of Nobel prizes in Europe, was published in the September issue of a science journal Intelligence.

The study explains that Finnish students excel on PISA tests because of the high IQ and personal characteristics of conscientiousness and agreeableness. These features, on the other hand, could also reveal why Finland has only two Nobel science prizes, and one of them was granted to Finland-Swede Ragnar Granit in Psychology or Medicine, while the other to a Finnish-speaker, Artturi Virtanen in Chemistry for his research in agricultural and nutrition chemistry in 1945.

As Finland-Swedes have different genetic background than Finns, it was drawn that Finland has only one Nobel laureate. This places Finland relatively at 28th place, above only Poland and Japan in the top 30 nations in terms of per capita Nobel prizes.

Dutton explains that Nobel prizes are predicted by extreme high IQ, which is associated with a diverse genetic background, high extraversion and low psychoticism. This is a personality dimension which is characterised by a tough-mindedness, non-conformist and risk-taking attitude. The study found that Finns have the highest IQ outside Northeast Asia, but the smallest range. This means that there are few at the extremes. However, Finns are low on the extraversion scale and high on psychoticism, resulting in that despite high IQ, they have few Nobel science prizes per capita.

"It all made sense," he says. "It fits the tendency to be conservative and a lot of new things come here much later, it's like the saying vihdoinkin Suomessa (At last in Finland)." While they can produce high results in exams, people who are conscious, tend to be conservative, and those who are agreeable avoid challenging the system with new ideas, which doesn't lead to Nobel-worth discoveries.