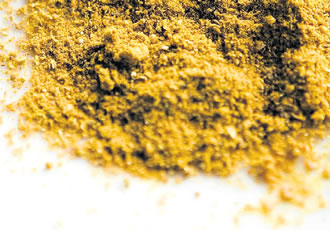 Curry spice, the staple of Indian cuisine, has been found to have some surprising health effects. Turmeric, commonly found in curries, contains a compound which boosts the brain's ability to heal itself.

According to a BBC report, a German research group was the first to identify turmeric's health properties.

The German scientists found that in rats, a compound found in turmeric boosted the growth of nerve cells that help the brain repair itself. Certain parts of the rats' brain, known to be involved in nerve cell growth, became more active after they had been given turmeric.

The discovery could lead to the development of new drugs to treat patients suffering from Alzheimer's disease or stroke.

The researchers, however, emphasised that further studies are needed to confirm the beneficial effect of turmeric, also in humans.

To date, all the experiments have been carried out in a rat model, with promising results.

This is not the first time that turmeric has been found to have a beneficial effect on health. Previous studies have suggested that another compound found in turmeric, curcumin, could reduce inflammatory reactions in the body and even fight cancer cells.