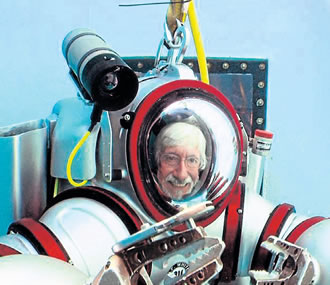 The ingenious diving apparatus allows divers to move and breathe freely deep under the sea.

During his ocean adventure, Tintin, the world-famous Belgian cartoon reporter, wears a deep-sea diving suit that needs to have air pumped into it continuously from the surface. The diver's life depends on the air hose attached to the suit working properly.

Modern-day ocean adventurers, including explorer Jacques Coustaeu's son Jean-Michel, can now rely on a deep-sea diving suit that is much safer to use. In many ways, it is more like a submarine.

Its oxygen system provides life support for up to 50 hours. The suit's shell can withstand an intense pressure 30 times greater than air pressure at the surface, allowing a diver to descend down to 300 metres.

Developed by Canadian Nuytco Research, the hard metal dive suit bears a striking resemblance to the space suits astronauts wore for the moon landings in the late 1960s and the early 1970s. Originally designed for maintenance work of New York's underground drain system, the suit has undergone vast amounts of development work to become a unique atmospheric diving system.

The suit has been used by the United States Office of Ocean Exploration and Research and photographers of the renowned journal National Geographic.

The half-a-million-euro diving system has also been employed in oil exploration in the Persian Gulf. At the beginning of September, an archaeological team descended to the seafloor in the Greek archipelago in the Aegean Sea, using the suit to explore an ancient Roman shipwreck.

The wreck had been discovered by divers looking for sponges back in 1900. A number of treasure hunters have since lost their lives trying to reach the ship.

Until now, divers have only been able to explore parts of the wreck down to the depth of 60 metres, but this novel diving system allows them to go much deeper.

An ancient device, the Antikythera Mechanism, designed to predict astronomical positions and eclipses, has previously been recovered from the wreck.

The wreck can turn out to be a veritable treasure trove of ancient objects, which can now be discovered with the help of the new deep-sea apparatus. After using it, diver Theotokis Theodolou sang the praises of the suit to news agencies, saying it allowed a diver to move freely deep in the ocean and carry out work requiring great precision.

The suit can be fitted with up to eight 1.6-horsepower thrusters, which the diver can operate with his feet.

"I could grab, pick, squeeze and dig with my hands for hours," explains Theodolou. This is where the suit differs from a submarine, allowing the diver to get up close and personal with any object discovered.

The oxygen in the Exosuit is replenished on the basis of the diver's metabolic rate and pulse and the air matches closely the air we have at the surface.

Usually divers need to pay very close attention to the mixture of gases they use when diving at similar depths.

The pressure inside the suit is similar to the air pressure at the surface, allowing the diver to ascend more rapidly without concerns over decompression sickness.

If the diver for some reason loses consciousness, a team monitoring the dive can control the apparatus and direct it back to the surface.

The suit was developed by a Canadian inventor and businessman, Phil Nuytten, who joined a diving club in Vancouver at the age of 13 and started selling diving equipment two years later. At the age of 18, Nuytten almost drowned in a diving accident, an event which led to him to starting work on improvements to breathing apparatus. With time, these ideas matured into the suit.

Nyutten was granted a patent for the joints used in the suit already in 1985 and tests on the latest version of the suit kicked off in 2009.

Nuytten has received France's prestigious Jules Verne Award for his work on deep-sea technology. And it is easy to image Nyutten in the role of a latter-day Captain Nemo.

The exploration of the worlds under the sea is just beginning and inventions by Nuytten, whose company has also developed submersibles, can contribute to the successful completion of the work.