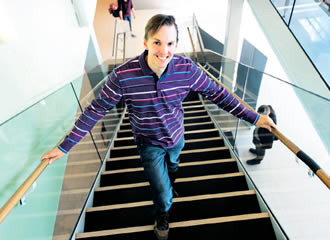 Perhaps the first university in the world to do so, the University of Turku is set to introduce evolutionary psychology as a minor subject, available to all the students of the university.

Evolutionary psychology is a field of study, which focuses on the effects of natural selection on the human mind and behaviour.

"The idea is to introduce evolutionary psychology as a tool in as many academic disciplines as possible," says Markus J. Rantala, a lecturer at the University of Turku.

The courses in the subject have attracted larger numbers of interested students than the lecture halls can hold.

Rantala believes that evolutionary psychology can be applied in almost all fields of science, saying that the evolutionary viewpoint will make a final breakthrough as an interdisciplinary approach also in Finland as it has done in top universities elsewhere.

Economics, anthropology, sociology and medicine have already integrated ideas and theories stemming from research into evolutionary psychology, a discipline which can shed new light on phenomena ranging from family dynamics to inheritance systems.

When listening to Rantala, it is easy to envisage the discipline, which has now gained a position as a minor subject at university, as a real super science. According to him, the only thing holding back the new and emerging field are reporters.

The media has often presented evolutionary psychology as a science studying sexual selection. Rantala says this is not only because scientists in the field – Rantala included – have carried out numerous studies on how we choose our partners but also because reporters find the topic fascinating.

"Unfortunately studies on other topics do not get reported. Reporters also try to write sensational articles that sell at the expense of the scientific content, which does nothing to improve the public image of the discipline."

Some theories presented by evolutionary psychology have also received vocal criticism, such as the idea that the modern human mind is that of a stone-age caveman, often seen as one of the assumptions prevalent in the field.

Rantala says that the image many people hold of evolutionary psychology is lagging 20 years behind the reality.

"There is no reason to assume that the human mind evolved in the Stone Age. We share many of our human characteristics, sexual selection included, with other animals. These features have evolved dozens or hundreds of millions of years ago."

"On the other, if an inherited characteristic is strongly linked to reproductive success, evolutionary forces can mould it very quickly."

Rantala says that the image of the modern human as a caveman stems from the fact that the human mind has not undergone great changes over the past few millennia. Even though we live in huge cities, surrounded by modern technology, we possess similar brains to the ones our stone-age ancestors had. And this is the root cause for many problems plaguing modern humans.

Rantala says evolutionary psychology does not play down the influence of the environment and culture or learning as the critics of the discipline often claim.

Feminists often accuse the field of perpetuating male chauvinistic views but Rantala refutes these claims by saying that according to evolutionary psychology, the sexes are equal.

"The shift to an agricultural society led to inequality between sexes. Inequality is a cultural phenomenon, not a result of our evolutionary past."