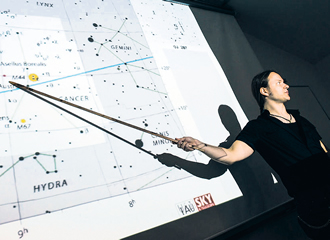 People who study black holes must be staunch believers in the theories of physics – and themselves – as no direct evidence is available on them.

Astrophysicist Pauli Pihajoki believes that in 2021 we will witness a radiation outburst from the double black hole OJ287. He must wait for seven years to see if his prediction is correct.

Last Friday, Pihajoki defended his doctoral dissertation on the OJ287 system, which has made the Tuorla observatory renowned among the international astrophysics community.

In Turku, scientists who have studied the black hole have included Aimo Sillanpää, Harry Lehto and Professor Mauri Valtonen, now retired. The Turku-based team showed that OJ287 is a binary system formed by two black holes, a finding which gains additional evidence from Pihajoki's research.

A black hole can be identified because it gobbles up gases and interstellar dust and then converts the absorbed material into emitted heat energy and light, which can be observed from Earth, at the wavelength of visible light.

OJ287, which Pihajoki has adopted as his research topic, defies belief and description.

The bigger of the two black holes in the system was for a long time the largest black hole ever observed.

Located in the heart of a distant galaxy, the supermassive system has a mass of 18 billion Suns and its event horizon – boundary of spacetime – is larger than our solar system.

"Through a telescope, it looks like a small dot of light," explains Pihajoki. The light is emitted by the matter sucked into the black hole.

Lucky in their sights

First seen in astronomers' pictures more than a century ago, OJ287 was identified as a source of radio waves in the 1960s. The old images are used as support for new observations.

Scientists got lucky because OJ287 is located in the constellation of Cancer, close to the other planets. When astronomers took pictures of these planets, OJ287 happened to be visible in the images.

The radiation emitted by the binary black hole system has been travelling for 3.5 billion light years. The wavelength of the light formed by the gases from OJ287's galaxy bears witness to the great distance the light has travelled. The light waves have had time to stretch and are close to the wave length of red light.

As the universe has expanded while the light has been travelling through space, the wave length has become longer.

The giant black hole has a companion, which equals hundred million Suns in size.

The interaction between the two black holes of different sizes is what makes the OJ287 system so interesting.

"We really got lucky, being able to observe two black holes so close to each other," says Pihajoki.

The black holes are 0.2 light years apart, which is no distance for objects of this size.

"On a cosmic scale, a system like this is in existence no longer than a blink of an eye. They will collide within tens of thousands of years."

Something is already known about the OJ287 system.

The bigger of the black holes in the system has an accretion disc around it, containing matter that is sucked into the black hole by its gravitational pull.

That is when the black hole emits electromagnetic radiation, some of it on wavelengths that are invisible to the human eye.

Pihajoki has deduced that outbursts also take place just before the small black hole makes its way through the accretion disc.

He says that the reason for this is the gas around the binary system, which is distributed unevenly. When the small black hole travels through the gas cloud it causes the temperature to soar in the denser areas, resulting in an outburst.

"If we see an outburst in 2021, it provides independent evidence for the existence of two black holes in the system," says Pihajoki. This would be a significant finding in the field of astrophysics.

While waiting for the year 2021, Pihajoki will focus his energies on different research topics. The guitar-playing weightlifter will, however, stick to studying black holes, just from a different perspective. Telescopes and computers are not the only tools that can be applied to the study of black holes.

"I use pen and paper when I play with formulas and figures," says Pihajoki. The Tuorla observatory was equipped with extra white boards and felt tips when Juri Poutanen took over as the head of the observatory at the beginning of the year.

Pihajoki's notebook does contain drawings of outbursts of black holes.

Some of the formulas are familiar from upper secondary school science lessons, and for example the formula for kinetic energy is pure Newtonian physics. The theory of relativity and Einsteinian physics are not required in the early stages of studies, says Pihajoki.

Closer to the black hole, scientists need to resort to Einstein's theories. The Turku-based research team say that OJ287 is good at creating gravitational waves. These waves, predicted by Einstein, will provide the next research topic for the team.