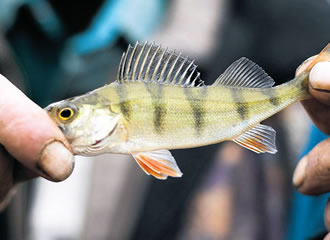 Pollutants in water systems are not always unequivocally harmful to aquatic animals. A Swedish study revealed that residue of psychopharmaceuticals used to treat anxiety lower the mortality rate of perch.

Umeå University has long performed groundbreaking research on the effects that pharmaceutical drug residue produces on the behaviour of fish. A study published last year showed that remnants of oxazepam, a drug used for anxiety, resulted in braver and more curious activity among normally timid fish. Individuals exposed to the drug examined their surroundings more freely than normally.

A new observation in a recent study shows that exposing fish aged between three-to-six days to oxazepam for 24 hours reduced the mortality rate of juvenile fish, when compared with the control group.

It remains unknown as to why psychoactive drugs reduce fish mortality. It is possible that since fish exposed to the drugs explore their surroundings more boldly, they find more nutrition, and thus they fare better.

Yet the results, yielded in controlled circumstances of a laboratory, do not reveal much about the effects of drug residue on natural populations. In natural circumstances, the "anxiety" of perch is rooted in a valid cause, as excessively bold and active individuals become prey to predators more easily.

Even if perch mortality was diminished in natural populations, this would have consequences on the ecosystem. A reduced perch mortality rate would correspondingly result in increased mortality among their prey.

Researchers emphasise that ecotoxicological studies are not able to study drug residue in the same way as other pollutants. Although pollutants are always detrimental, at times, the therapeutic effect of drugs can be of benefit to fish. As the ice melts in the spring, fish are often feeble and stressed. During this time, the therapeutic effect of stress-reducing medication on fish can be more notable.

The study was published by Environmental Research Letters.