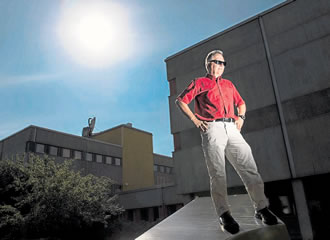 The sun and weather are the favourite topics of discussion every summer. Kalevi Mursula, professor of space physics at the University of Oulu is interested in both but his interest goes beyond the atmosphere. Mursula studies space climate, including radiation and particles in our solar system.

At the moment, the space climate is undergoing an extremely interesting phase.

The engine of the space climate is the sun, which exerts is influence on its environment by emitting light and releasing solar wind, a stream of charged particles. Now a 100-year period of heightened solar activity is coming to an end.

Increased solar activity refers to strong solar winds and electromagnetic eruptions called solar storms. When coming into contact with the Earth's atmosphere, these eruptions may disrupt the functioning of electric devices and communication networks.

Last week, Helsingin Sanomat reported physicist Dr. Pete Riley's calculations indicating that the likelihood of a disruptive solar storm over the next decade is 12 per cent.

"All our data on space particles are from the period of heightened solar activity. It'll be interesting to see how the decrease in the activity affects the space climate."

The task is made easier by the large quantity of data available to scientists as solar radiation is being monitored on dozens of wavelengths across the electromagnetic spectrum.

But the Academy of Finland's Centre of Excellence, the Research on Solar Long-term Variability and Effects (ReSoLVE) team, led by Mursula, is not satisfied with the current state of knowledge.

The scientists at the centre want to find out what has occurred in the sun's activity over the past 150 years.

"We have both direct and indirect observations on solar activity available to us. For example, the number of sunspots have been observed for a long time."

Information dating even further back can be gathered from drillings on ice caps, which contain isotopes that make it possible to draw conclusions on earlier changes in solar activity. These isotopes indicate that the sun was exceptionally active during the 20th century but periods of even greater activity took place thousands of years ago.

The reason behind the fluctuation in solar activity is not yet known. One hypothesis is that these long solar cycles are caused by the gravity forces of the planets in the solar system.

However, the current knowledge does not support this hypothesis.

Much still to understand

Another possible explanation is that the cycles arise from imbalances in the sun, with different rhythms in the different layers or parts of the sun causing these long-term trends.

"Even though we study the sun extensively there's still much that we don't understand about it."

Changes in solar activity are generally thought to have only a minor impact on the climate on Earth.

Recent studies have, however, shown that changes to the solar cycle affect the weather in the North Atlantic as during the years of strong solar winds larger numbers of space particles enter the atmosphere where they can break up the ozone layer. This causes temperatures to rise in Northern Europe.

So far, solar activity has only been linked to the variation taking place during the 11-year solar cycles and studies do not yet provide answers to questions on how solar activity affects global warming.

But there is no denying the importance of the sun: almost all life on Earth is reliant on the sun's energy.

The significance of the sun to humans becomes evident if you pay a visit to one of the ancient sun temples, as Mursula likes to do in his free time. He was particularly impressed by the Newgrange temple in Ireland.

"The temple built 5,000 years ago marked the exact time of the winter solstice."