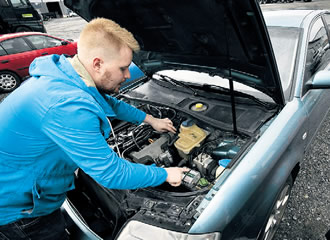 The hood of a Volvo is closed at a Pirkkala industrial hall, as the installation work is under completion. The Volvo V70 of Ylöjärvi-native Olavi Kuosmanen now has a small device with an aluminium shell that changes the car: it can be fuelled with gasoline, as before, or with E85, i.e. ethanol.

E85 is much more affordable than gasoline, a little over a euro per litre.

Volvo became a flexifuel Volvo in an instant. The same trick could be performed on about 700,000 Finnish cars running on gasoline.

"If one drives 20,000 kilometres annually, it amounts to 600 euros worth of savings", Kuosmanen calculates.

The device and installation costs about 450 euros, so the investment pays itself back in less than a year.

This is not all. According to Kuosmanen, a 2.5 litre turbo machine's 200 horsepower receives a jolt of 30 horsepower.

"One would think that the parliament and decision-makers would be interested in replacing imported fuel with a domestic option that utilises waste", he ponders.

He is referring to the RE85 ethanol fuel produced from waste, developed by the Finnish energy company ST1. The turbo Volvo is now, in a sense, running on domestic waste.

One would imagine that other drivers would also be interested in installing the device, as it provides driving kilometres with less costs and emissions. Trafi is not as enthusiastic over the phenomenon due to the downsides it perceives in the matter.

"The device does not reduce emissions per se, but increases them. Once you intervene with the car's original engine control or insert other matters into it, the engine does not operate in all conditions, as intended by the factory. In these circumstances emissions grow significantly", says Otto Lahti, Head of Unit at Trafi.

The system promises to reduce fossil carbon dioxide emissions significantly, but Lahti states that other emissions pose a problem.

"The engine releases different kinds of emissions. They can be roughly divided into carbon dioxide emissions and harmful local emissions, such as nitrogen oxides and incombustible hydrocarbon, which affect the air in the city in particular", Lahti says.

"Especially in cold starts emissions grow significantly, as ethanol is not as easily ignited as gasoline."

So Lahti would not install the system in his car?

"I would not speculate. It is the common notion that the vehicle works, but a mixed group of cold start ignition problems have been observed, as well as erosion problems of the engine in long-term use."

"It is a case of about 99 per cent of the trip resulting in 80 per cent less fossil carbon dioxide emissions. If it results in, for example, one per cent more nitrogen oxide, which is worse?"