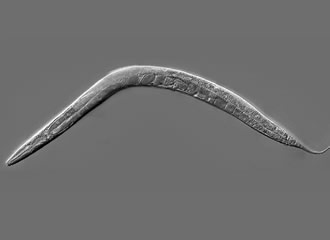 Researchers have generated mutant worms that do not get intoxicated by alcohol. The result may help scientists to develop new medicines to treat people suffering from alcohol addiction.

A research team at the University of Texas inserted a molecule extracted from the human nervous system into the worms. It is one of the many molecules in the human body that binds alcohol.

"This is the first example of altering a human alcohol target to prevent intoxication in an animal," says Jon Pierce-Shimomura, assistant professor in the university's College of Natural Sciences and Waggoner Center for Alcohol and Addiction Research.

The research being in its early stages, the researchers do not know yet which aspects of alcohol misuse and related problems the finding may provide help for. The effects of alcohol on the brain are complex.

According to the researchers, the worms used in the study, Caenorhabditis elegans, model intoxication well, with alcohol causing them to move more slowly.

The worms are not as ideal for studying other aspects of alcohol addiction, such as alcohol tolerance and withdrawal symptoms, and more tests will need to be carried out, using for example mice as a model.

Pierce-Shimomura speculates that further studies may produce a perfect antidote to the harmful effects of alcohol, helping counteract the intoxicating effects and withdrawal symptoms.

The news on the study by the University of Texas was reported by Science Daily.