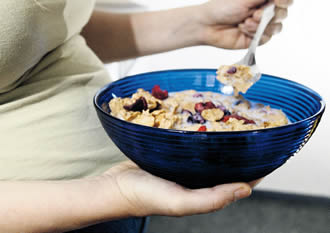 According to a recent study the mother's diet right before impregnation and immediately after it affects the baby's genotype permanently.

The study was published in the Nature Communications journal.

Previous animal tests have proven that diet can activate or passivate genes, but this is the first time that it has been proven with humans.

Researchers followed women's diets in Gambia, where frequent rainy and dry seasons affect women's eating significantly. Researchers measured the nutrients in the blood of 84 women who were impregnated during the rainy season, and repeated the same thing for the same number of women who had become pregnant during the dry season.

The DNAs of born babies were studied from two to eight months after birth.

In an interview with the BBC the leading researcher Branwen Hennig states that it is the first time that it has been observed that food consumed by mothers can change a child's genes for the rest of their life.

"According to our results the mother's nutrition before impregnation and in its early phases is important, and may affect the next generation's health", Hennig says.

"Women should have a balanced diet before impregnation and during pregnancy," Hennig tells the BBC.

Previous studies on mice have demonstrated that nutrition during the mice's pregnancy affects, for example, the colour of the offspring's fur.

This effect signifies that the gene does not change, but its regulation does. The study showed that babies fertilised during the rainy season experienced more so-called DNA methylations than those fertilized during the dry season. The amount of methylations was also proportional to the nutrient levels in the mother's blood.

Depending on the amount of methylations, the gene can either activate or passivate – i.e. enter an "on" or "off" state.

Researcher Rob Waterland tells the BBC that the mother's nutrition "can leave permanent marks on each gene of the child".

Next up the researchers seek to develop as good a diet for pregnant mothers as possible.