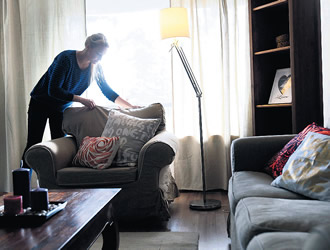 Is it possible to create a cosy and harmonious decor without spending a cent? Believing it could be done with time, patience and a little bit of ingenuity, Ninni Laaksonen (28) decided to put the idea to a test.

And so last November, Laaksonen suggested to her friend that she would furnish for her and her family the kind of home they wanted to have when they returned to Finland in March after several years spent working abroad.

Excited about the idea, the friend gave Laaksonen, an interior design enthusiast, free rein to conjure up a perfect home for them.

"I wanted to save them from having to take a loan to furnish their home. Even getting just the essentials would have set them back thousands of euros," explains Laaksonen.

And the hunt for furnishings really had to start from scratch as the family of three had rented a fully furnished flat as their home abroad. The only piece of furniture they had bought themselves was their three-year-old son's bed, which they were bringing with them.

Everything else from a kitchen table to a toilet brush needed for the new home had to be found – for free. And not just anything would do as Laaksonen had an image of a home with a warm, cosy atmosphere on her mind and she wanted all the pieces to work with this plan.

Laaksonen kicked off her nest-building project by setting up a Facebook group called "Ninni's great interior design challenge", hoping to prompt her friends to check their cellars and cupboards for any furniture and other household items going begging but to her surprise the project attracted more widespread attention.

"We have a cabinet going spare!" "Do these cushions go with the decor?" With messages coming thick and fast, Laaksonen calculated that she was in contact with more than a hundred people.

"We all have accumulated all kinds of stuff we don't need any more but just don't get around to getting rid of. All that is needed is someone to come and collect the extra stuff, and that person was me."

Thanks to the deluge of offers of free bits and bobs, over the last few months she has spent plenty of time on the road in Southern Finland in her estate car picking up pieces of furniture.

"It might sound crazy but this project has helped counterbalance the stress of day-to-day life," explains Laaksonen, who is currently at home with her children.

She would not have got involved in such a huge interior design project without pay for just anyone as for several months her and her family's home served as a storage space for all the furniture that had been donated while her friend was still searching for a suitable flat.

The numerous encounters with people giving away household items followed by an all-hands-on-deck call gathering friends to help with the move finally resulted in just the kind of home in eastern Helsinki that Laaksonen had planned and her friend had hoped for. "Even though I knew it would turn out well I was still pleasantly surprised to see how good it all looked."

The family's English-speaking father described his new home as fantastic. Even though all the furniture in the 80-square-metre flat comes from different sources the result is not a hotchpotch of styles. Laaksonen explains that her aim had not been to reproduce an image taken from an interior design magazine but to create a cosy space where you want to spend time in.

The goal of the project is spelled out on the kitchen wall with embossed letters: home.

"Wall stickers may not be the height of fashion any more but my friend wished for them and of course we used them as some were available," says Laaksonen.

The harmonious look was only made possible by her learning to say "no, thank you". Keeping her eye on the prize – the overall look she wanted to achieve for the flat – the interior designer did not accept everything that was offered to her free of charge.

"Of course I was sorry to have to turn down some very kind offers."

Laaksonen sold the objects that did not get used on her Facebook page and spent the proceedings on a matching armchair to go with the sofa as she was not able to get the right chair for free or by swopping it for another piece of furniture.

All the finishing touches, including candles on the coffee table, are in place, but Laaksonen is not off duty quite yet, having promised to organise the house-warming party to boot.

After toasting "Finland's most beautiful home furnished without any money", she turns her gaze to her next project.

"Perhaps next I'll try to get rid of all the stuff I don't need. This project has taught me that sometimes less is more."