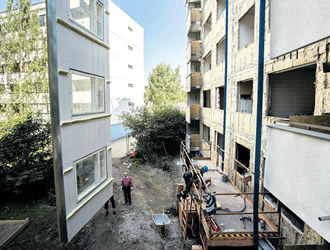 The renovation of housing in suburbs going to rack and ruin must be speeded up, urges the Ministry of the Environment. Built in the 1960s and 1970s, these blocks of flats are behind with work that needs doing, with the cost of this backlog of maintenance amounting to tens of billions of euros.

Housing companies, in particular, have been dragging their feet in getting maintenance work done, largely because getting a project approved at a housing company meeting can be a long drawn-out process as the aging residents do not have money or enthusiasm for costly work.

To stall the dilapidation of suburbs, 15,000 to 20,000 flats should be renovated annually, costing billions of euros a year until the end of the 2020s.

Suburbs house around 1.5 million Finns, many of whom have their whole wealth tied to their flat.

An expert working group that was established by Housing Minister Pia Viitanen (SDP) to find ways to kick-start a renovation boom submitted its report to the minister on Tuesday.

The working group proposes that the government guarantees renovation loans for housing companies that draw up a report on the renovation needed and work plans for the next ten years. The state guarantee is likely to come under discussion soon in the budget framework talks.

Housing companies have already been able to receive interest subsidies on renovation loans but this system does not include state guarantee on the loan. With the banks tightening their loan terms particularly in small municipalities with decreasing populations, a state guarantee could make a difference.

"We have to consider whether the current legislation needs to be changed to enable housing companies to launch renovation projects. That's something for the Ministry of Justice to do," says Teija Ojankoski, the head of the working group and the managing director of VAV Asunnot Oy, a rental housing company owned by the city of Vantaa.

The expert group calls for municipalities to give a helping hand to housing companies and allow the construction of extra buildings on plots in suburbs.

When a housing company is granted building permission for a block of flats or a terraced house to be built in the woods at the edge of the plot, the housing company can sell this right to a construction firm, earning much needed cash to pay for work on the plumbing, façade or the roof.

To make the process of constructing additional buildings run more smoothly, municipalities should cut the red tape involved in getting a building permit. The working group expressed a wish that proposed changes to city plans could be processed and decided more quickly.

"Municipalities should draw up strategies that apply to an entire suburb, also addressing social issues such as home care for the aging population," says Risto Vahanen, the chair of the Board of Directors of Vahanen Oy, a company specialising in maintenance and renovations.

As the blocks of flats were built using elements, similar techniques can be applied to repairs. Preparing the elements that need replacing in factories in advance saves money and helps minimise the time the flats are unliveable.

To make the construction of additional buildings an attractive proposition for municipalities, the expert working group would establish a state infrastructure subsidy fund. Currently, the state subsidises the construction of municipal infrastructure in new suburbs to the tune of 36 million euros a year and a similar sum could allocated for the renovation of old suburbs that are in need of more than a lick and a promise.

The subsidy money could be used for work on drains and pipes along with the construction of cycling lanes and parks, if deemed necessary.

The group suggests that subsidy systems for housing companies set up to boost the construction business during the economic downturn should be abolished by 2020. Housing companies have been able to receive a 10-per cent subsidy on the cost of any repair work they have ordered.

If the housing in suburbs is not kept shipshape, the quality of accommodation will suffer and energy costs increase, affecting the value of the property.

Some of the small suburbs are located in municipalities with dwindling populations where the renovation costs might exceed the value of the property, in which case in the only feasible option is to demolish the whole building, according to the working group.