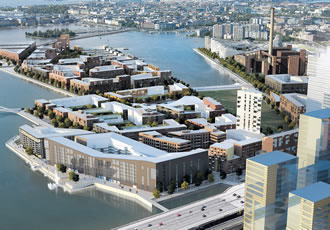 WHAT just four years ago was a bustling harbour, at which huge cranes handled thousands of containers, is now just a vast, empty area filled with piles of rock while huge pits in the ground mark the foundations of the future suburb. This is Kalasatama, one of the biggest residential construction projects in Helsinki at the moment.

As Helsinki’s population grows, so does the need for housing, which means projects such as the one in Kalasatama. However, the project manager of the east coast area, Tuomas Hakala, doesn’t see Kalasatama as anything unusual: “Kalasatama and Jätkäsaari are biggest ones right now, but for instance the building of Vuosaari started in the 1980s and is still going on. There have also been many large constructions in the past, such as the development of Töölö some 90 years ago.” 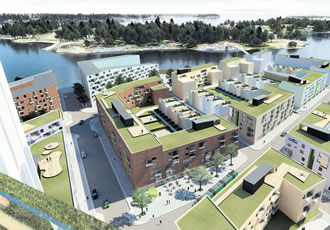 From factories to floating houses

Kalasatama has always been a forerunner in the development of Helsinki. In the early 1800s, Helsinki was a small city with a few thousand inhabitants. Districts such as Kallio and Sörnäinen were merely woods and farmland, with few inhabitants, and were therefore a safe place for factories. With the factories also came the need for a port closer than the one in Kauppatori. With good sea routes and close proximity to the industrial quarter, the Kalasatama harbour was founded in 1874. It boosted the economy and gave birth to districts such as Kallio and Hermanni, as the harbour workers needed cheap homes close to their jobs.

The harbour may be gone, but its shape stays in the new plan, as well as one harbour building from the 1960s and an old gas container from 1929. The spirit of seafaring will be preserved, in the form of 40 floating houses. These are buildings that do not have solid foundations, but instead are moored to concrete pontoons.

According to Hakala, they are designed to endure both winter and the waves, which reach a maximum height of one meter. “We are also building seawalls to stop the waves, but the houses are still going to swing a little, so people moving in should have some seafaring spirit in them.” Hakala says.